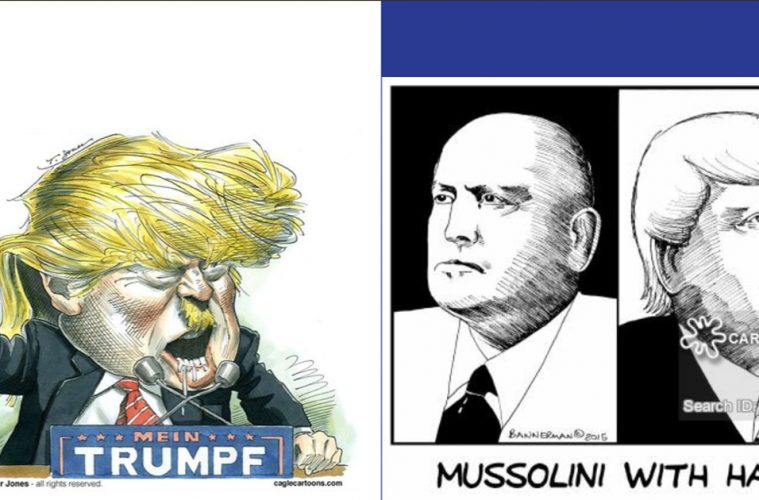 Once again, we are seeing an example of a public-school teacher using her classroom to push her personal political agenda on her students. Teachers are supposed to teach, not brainwash the nation’s kids, but in today’s ever growing liberal nation, far too many teachers are using their classrooms as propaganda indoctrination centers. The results have been clearly demonstrated by the thousands of younger people who whine, cried, screamed, walked out of classrooms and protested because a conservative beat out their liberal candidate.

After one lesson plan reached the astute parents of students attending Saratoga Springs High School in New York, some of the parents said enough is enough.

A tenth-grade teacher at the high school was teaching a lesson on fascism and how it played a part in leading to World War II. In the discussion on Germany’s leader Adolf Hitler and Italy’s leader Benito Mussolini, the teacher compared President Donald Trump to the to Nazi and Fascist leaders. The teacher also included a comparison of Trump to Russia’s leader Joseph Stalin.

The entire lesson plan was posted to the school district’s website for everyone to see. However, after Fox News columnist Todd Starnes began investigating the lesson and asking questions, the lesson was removed from the general open website, but was still available to faculty, teachers and students who had passwords to the internal website.

They have grouped together to take action to stop the political brainwashing of their kids by radical teachers who really have no place in the classroom. The concerned parents formed a group calling themselves the ‘Conservative Chicks’ and took their complaint to the school about the lesson plan.

One parent, only identified as Melissa, commented about the lesson, saying:

“It’s total indoctrination. It’s not their place to indoctrinate our children. It’s their job to teach the facts. Healthy debate is one thing but this definitely crossed the line.”

“Trump has absolutely no relation to World War Two. There’s no reason why he should be included with Stalin, Mussolini or Hitler. They are trying to link him to the leaders of that time. That crosses a line.”

“The fact they posted this on the school’s website shows just how brazen these teachers are.”

“Liberal teachers need to be reminded it’s not okay to use their platform to push their agenda on our kids.”

One of the moms told Starnes:

“These teachers are really pushing a liberal agenda on the kids.”

Regardless of the complaints of the parents, Mike Piccirillo, Superintendent of the school district defended the lesson plan, saying:

“Teaching about fascism as a political movement in the context of World War II is part of the curriculum.”

Starnes asked them to explain how does comparing Donald Trump to the fascist leaders, have anything to do with World War II. Piccirillo responded:

“The cartoons you referenced were used as examples to introduce a student debate regarding how some media may be portraying our government as exhibiting the early signs of fascism.”

Starnes then asked if at some point in the lesson did the teacher explain why the comparison of Trump to Hitler, Stalin and Mussolini were not only unjust but inaccurate, he got no response.

This is why it is so important for parents to take an active role in their kid(s) education. If possible, get them into a private school. If not possible, take a proactive role and investigate what they are being taught. We’ve seen far too many instances similar to this where public school teachers are spending more time indoctrinating their students with their own personal agendas (political, sexual, ethnic, etc.) than they are actually teaching them. it’s the job of you parents to fight against and counter this kind of brainwashing propaganda. If you don’t, your kid(s) will grow up to be just like Hillary Clinton, Bernie Sanders and Barack Obama, OR WORSE!