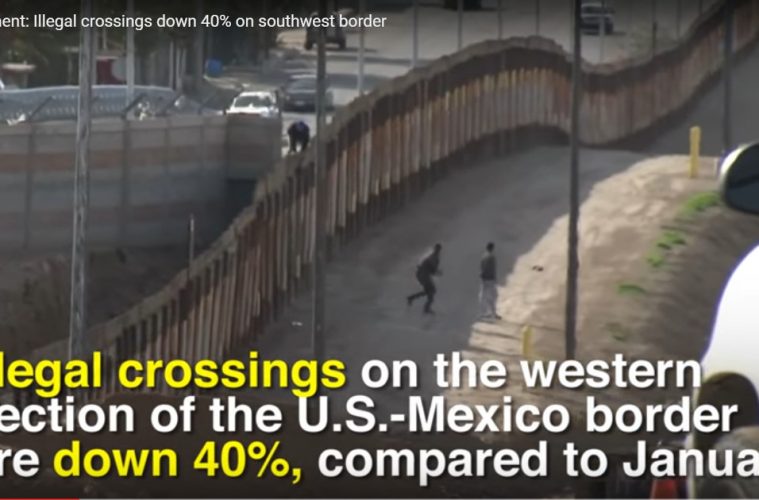 Illegal Border Crossings Down 40% in 1st Month of Trump Presidency

Two to three months prior to the 2014 midterm elections, Barack Obama started talking about using an executive order to give amnesty to the 11-15 million illegal aliens living in the US. Not wanting amnesty to be the reason for the Democrats to lose control of the Senate, Obama announced that he would wait until after the election to wield his dictatorial powers and pardon up to 15 million criminals (crossing into the US illegally is still a crime).

After the 2014 elections, Republicans were in control of both the House and Senate. Obama once again began talking about using an executive order to grant amnesty to illegal aliens already here in the US.

When word spread throughout the world that Barack Obama was going to grant amnesty and was not enforcing US immigration laws or securing the American border, millions of people illegally crossed the border without fear of being detained or deported. Nearly 100,000 unaccompanied minors from Central and South America came to US and were allowed to remain in the country. That influx was supported by Shawn Moran who at the time was with the National Border Patrol Council, who stated:

We definitely see increases in illegal aliens coming across the border when there is national talk of an amnesty.”

Moran explained that the huge influx of minors from Central America was the direct result of Obama’s failure to enforce immigration laws, saying:

“That was largely fueled by the idea that we were not enforcing our immigration laws, and if you got to this country, you could stay here.”

With that mindset, thousands of people from Mexico, Central and South America along with Africa and the Middle East are flooding into the US. With them come more cases of infectious Tuberculosis, Dengue Fever, chicken pox and the H1N1 swine flu. The evidence is being seen in the increased number of Border Patrol agents that are coming down with these diseases, including the infectious tuberculosis.

Countless numbers of the illegals crossing into the US were criminals and gang members, some of which have been in the news lately for kidnapping, raping and killing American citizens.

With word of President Donald Trump’s crackdown on illegal aliens, it seems the flood of illegals crossing into the US have drastically slowed down. He has announced that he wants to hire 5,000 to 8,000 additional border patrol agents to help secure the border and round up illegals for deportation.

“U.S. Customs and Border Patrol reported that the number of illegal border crossings dropped from 31,578 to 18,762 persons. Kelly said border agents usually see a 10 to 20 percent increase in illegal immigrant apprehensions from January to February.”

Just as word of Obama’s open border policy attracted countless people to enter America illegally, word of Trump’s crack is having the opposite effect of slowing the flood gates to a fraction of illegal crossing. Once the thousands of new border patrol agents get hired, trained and assigned, the number of illegal crossing should continue to decrease into just a trickle at best.

If Obama had done what his oath of office called him to do, we wouldn’t have nearly the problem with so many illegals in the country and we wouldn’t have all this controversy now that liberals are blaming Trump for. It’s all Obama’s fault to begin with, but Trump is fixing Obama’s mess.