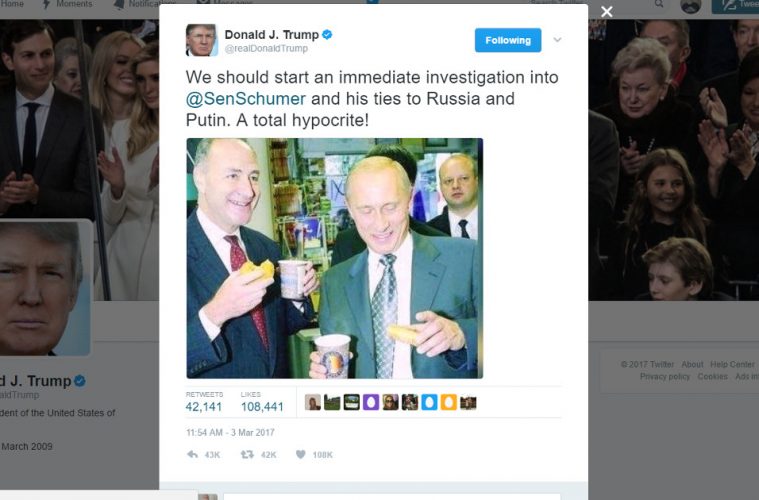 Democrats need to take the log out their own eye before they try to take the sliver out of another’s eye. In other words, they need to take a good hard look at themselves before they start casting allegations towards others. While Schumer is calling for an investigation of Trump’s relationship with Putin and Russia, Trump is suggesting the possible probe into teh relationships between Schumer and Putin.

If that photo looks familiar to you, it might be because you stumbled across it at one of many pro-Trump media outlets over the past week. The photo was emblematic of how the Trump-supporting Internet reacted to the news that Attorney General Jeff Sessions met twice with the Russian ambassador during the campaign, a fact that he failed to disclose during the Senate confirmation hearings for the job he now has.

The idea is: Liberals are mad about any Trump administration connection to Russia, so why aren’t they mad about this photograph, which shows a liberal lawmaker having a friendly doughnut with none other than Russian President Vladimir Putin? As Trump’s tweet makes pretty clear, the photo is circulating as a way to point out perceived hypocrisy on the left. If there’s nothing wrong with the photo of Sen. Charles E. Schumer (D-N.Y.), then how can you say Sessions did anything bad? Or so the argument goes.

Although there are many contextual differences to these two scenarios, and the news about Sessions’s undisclosed meetings resulted in the attorney general announcing that he was going to recuse himself from any investigations into the 2016 presidential campaign, the meme has been very popular on the Trump-supporting side of the Internet. These days, one of the ultimate signs of a right-wing meme’s success is whether it gets picked up by the president himself.