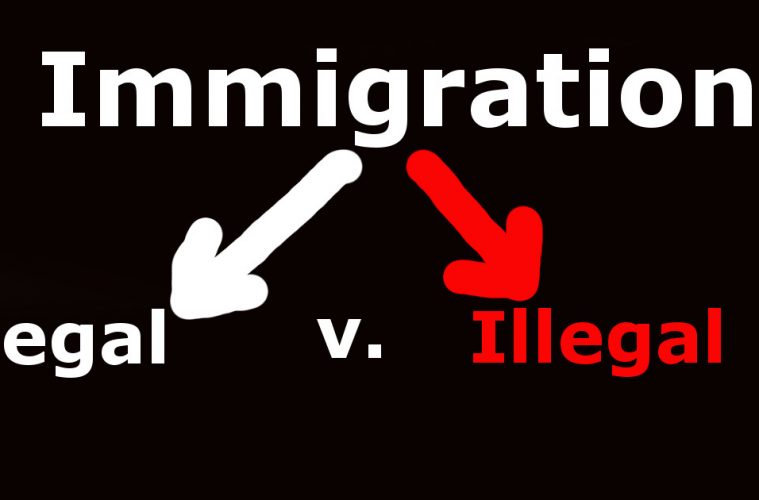 If you listen to all of the complaining liberals, the Democrats and the mainstream media, you would believe that President Donald Trump is against ALL immigrants, but he has never said or done anything of the sort.

During the presidential campaign, Trump was labeled a hater and against all immigrants when he announced that he wanted to secure the southern border with Mexico and deport ILLEGAL immigrants. He never said he wanted to deport ALL immigrants, just illegal immigrants.

He did mention that he wanted to stop the influx of Muslims into America, mainly because the vast majority of all terrorist activity taking place around the world today is being carried out by Muslims.

But all the liberals heard was that he was against immigrants.

When Trump signed his executive order calling for a TEMPORARY stop to all immigration and acceptance of refugees, liberals went running through the streets. They walked out of college classrooms, off their jobs and out of their homes. They gathered in the streets and protested against Trump and carried signs that called him a hater, racist and more.

Many, many signs they carried focused on the claim that America was a nation of immigrants as if Trump hated them. Time after time, the liberal mainstream media interviewed legal immigrants who were upset over Trump’s executive order. Many legal immigrants were just as faulty in their understanding of what Trump really said.

Liberals, Democrats and the mainstream media completely blew the entire executive order out of proportion. They made his order sound like it was a permanent ban against all immigration, legal and illegal, but they were wrong. This should be no surprise because the mainstream media thrives of twisting the truth to fit their liberal anti-American agenda. This is one of the reasons that President Trump referred to the liberal mainstream media as enemies of the American people.

If all of these liberals had just one ounce of intelligence or brain power, they would understand that there are different kinds of immigrants and Trump’s executive order was only temporary.

Please, allow me to explain:

My wife’s father, Thorold Mitchinson Watson, was born in 1903 in Barbados, West Indies. He was raised and educated in Barbados. In 1921, at the age of 17, he sailed from his island home to New York City to attend university with the desire to become a doctor. He was processed through Ellis Island and followed every letter of the law. He studied and went one to become a naturalized US citizen. Thorold Watson was a legal immigrant who became a citizen who followed the laws of the land and was proud to be an American as well as a Bajan.

We have very close friends who were born and raised in South Africa. They are white and after Apartheid became an international issue and blacks took control of the nation, it became very dangerous to be white. They had two children, one of which was a daughter who was out of high school and working. Young single white women were prime targets for South African blacks, who loved to take out their hostilities and hatred on white women. Our friends feared for their lives on a daily basis and even more so for the life and safety of their daughter.

They applied to the United States for immigration status, but the process took years and a lot of money. Finally, their applications were approved, but as they prepared to leave, there was a problem with their daughter’s paperwork and she was not allowed to enter the US. Fearing for her life and safety, they still obeyed and followed US immigration laws and were forced to leave her behind in South Africa with relatives. It took over a year before she was finally allowed to legally immigrate.

This family justifiably feared for their lives and safety, but they still went through years of following the legal procedure to immigrate to the United States. Today, they are all US citizens and that daughter and our daughter are best friends.

They are legal immigrants and the type that American was built on. They have felt betrayed and offended by the Obama administration’s allowance of letting millions of illegal immigrants remain in the US. It was additionally offensive to them to see all of the handouts and free government benefits, including free healthcare, that Obama gave illegals. When our friends arrived in the US, they had to find work fast and work hard for everything they got. As legal immigrants, they didn’t get free handouts from the government. They earned the right to stay here. They obeyed our laws. They studied, took the test and became legal US citizens and they never tried to vote before they were citizens even though they knew how to get around the system.

When the liberals, Democrats and mainstream media talk about ‘immigrants’, ask them which ones, the ones that came to America legally and did everything right or Obama’s illegal immigrants who broke the law and have never bothered to try to become legal immigrants?  There is a huge difference, and you cannot use one blanket term for both groups combined. It’s a great offense to the millions of legal immigrants.

And make sure liberals, Democrats and the mainstream media understand that Trump only wanted a TEMPORARY ban just long enough to tighten up the vetting system used to screen LEGAL immigrants and refugees. All President Trump was trying to do was to prevent possible terrorist attacks from being carried out in America and killing innocent Americans, nothing more. It’s not a matter of hate, but a matter of national security and the safety of every one of these screaming whining liberals.