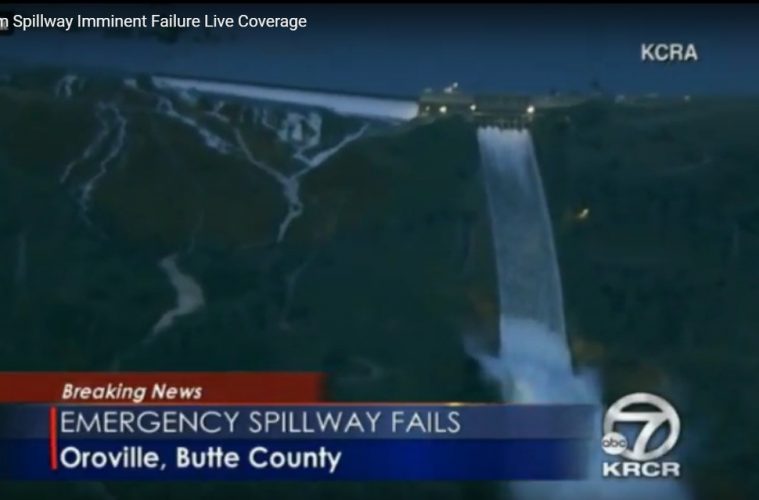 Whenever water crests a dam, it weakens the integrity of the dam structure and can lead to catastrophic failure of the dam. Torrential rains in northern California have filled Lake Oroville to overflowing capacity and more water is rushing into the lake, causing water to breach the 770-foot high Oroville Dam. If the dam fails before officials can release tons of water, it would cases massive flooding and destruction downstream and could kill thousands of people.

At least 188,000 people were asked to evacuate their homes in Northern California after authorities warned an emergency spillway in the country’s tallest dam was in danger of failing Sunday and unleashing uncontrolled flood waters on towns below.

Lake Oroville, about 150 miles northeast of San Francisco, is one of the state’s largest man-made lakes, and the 770-foot-tall Oroville Dam is the tallest in the U.S.

Sunday’s evacuation order came because of concerns the dam’s emergency spillway could fail. Over five hours later, hundreds of cars carrying panicked and angry people were sitting in gridlocked traffic.

“The police came and told us to evacuate,” said Kaysi Levias who was with her husband, Greg, at a gas station as they attempted to flee.

Officials warned residents that the spillway could fail within an hour.