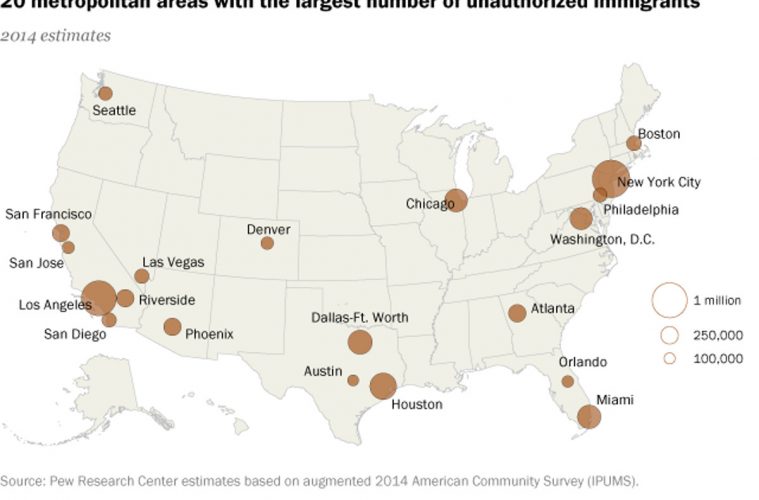 Where Do Most of the Illegal Aliens Live & How Much Are They Costing You?

Do have any idea where the majority of illegal aliens are living? Do they live in your area?

According to 2014 figures, at least 6,755,000 illegals are concentrated in just 20 metropolitan areas. Various other sources claim that there are between 11.5 million to as many as 20 million illegals living in the US. Since the figures above are nearly 3 years old, it’s probably safe to say that you can add another 5%-10% or more to those figures, meaning that as many as 7,431,000 illegals are concentrated in the 20 key areas.

According to the figures provided by Pew Research, the largest concentration of illegals, at least 1.15 million, are found in New York City-Newark-Jersey City, NY, NJ-PA. Second is Los Angeles-Long-Beach-Anaheim, CA with a minimum of 1 million.

Third is the Houston-The Woodlands-Sugar Land, TX area with at least 575,000, followed by the Dallas-Fort Worth-Arlington, TX areas with at least 475,000.

These are followed by, in order of number of illegals:

Of the 20 metropolitan areas listed with the highest concentration of illegals, only 2 (Atlanta and Orlando) are not currently listed as sanctuary cities. However, efforts by liberals are being made in both locations to make them sanctuary cities.

Based on the 2014 figures, approximately 61% of the illegal aliens (based on a total of only 11.1 million) live in the 20 metropolitan areas. Only about 36% of the total US population live in those same areas, meaning that the concentrations of illegals, percentage wise, are nearly double that of Americans.

Another interesting fact is that about 65% of legal immigrants and naturalized citizens live in the same areas, indicating a correlation between the concentrations of legal and illegal immigrants.

Imagine what would happen to the demographics of these 20 metropolitan areas if President Trump continues to deport millions of illegals. It could totally change the ethnic demographics which could be a benefit and/or a detriment to those areas.

Chances are, if a large number of illegals are deported from their metropolitan areas, it could save them, the county, state and federal government a lot of money. As of 2010, illegal aliens were costing US taxpayers close to $84 billion a YEAR. Based on the average rate of inflation and the increase in the number of illegals, that figure is rapidly approaching a cost of $100 billion a year.

Take California for example. In 2010, it was estimated that illegal aliens cost taxpayers around $21.8 billion. That figure is most likely closer to $25 billion a year now. Governor Jerry Brown is asking for a budget of $179.5 billion for the next fiscal year, partially due to a projected $1.6 billion deficit. A reduction of just 10% of the illegals could save the state up to $2.5 billion, enough to wipe out their deficit. A reduction of 25% of the illegals could save as much as $6.25 billion a year.

The same is true for every state. Deporting as many illegals as possible will help reduce the financial burdens on schools, jails, healthcare services and the many welfare benefits illegals receive.

From my friends and contacts in Arizona, a reduction in the number of illegal aliens will also result in reduction of crimes of all sorts, from burglary, robbery, vandalism, physical & sexual assaults, rape and murder, not to mention all of the drug related crimes connected to illegals and the illegal trafficking of drugs across the border.

So where do you live and how many illegals live in your area? How much are they costing you in the form of taxes, jobs, etc.?