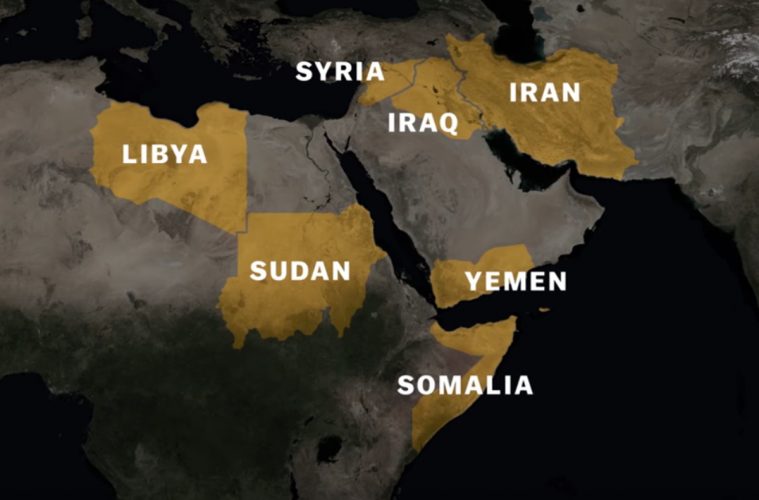 “By the authority vested in me as President by the Constitution and laws of the United States of America, including the Immigration and Nationality Act (INA), 8 U.S.C. 1101 et seq., and section 301 of title 3, United States Code, and to protect the American people from terrorist attacks by foreign nationals admitted to the United States, it is hereby ordered as follows:”

“Section 1.  Purpose.  The visa-issuance process plays a crucial role in detecting individuals with terrorist ties and stopping them from entering the United States.  Perhaps in no instance was that more apparent than the terrorist attacks of September 11, 2001, when State Department policy prevented consular officers from properly scrutinizing the visa applications of several of the 19 foreign nationals who went on to murder nearly 3,000 Americans. And while the visa-issuance process was reviewed and amended after the September 11 attacks to better detect would-be terrorists from receiving visas, these measures did not stop attacks by foreign nationals who were admitted to the United States.”

It seems that everyone believes that Trump targeted specific Muslim nations and keep referring to the 7 nations – Iran, Iraq, Libya, Somalia, Sudan, Syria and Yemen, but after reading through Trumps executive order, I found that the only country specifically named is Syria. None of the other 6 nations are mentioned by name, so where did that list come from?

On January 29, 2017, Trump defended his executive order on immigration by saying in part:

“My policy is similar to what President Obama did in 2011 when he banned visas for refugees from Iraq for six months. The seven countries named in the Executive Order are the same countries previously identified by the Obama administration as sources of terror. To be clear, this is not a Muslim ban, as the media is falsely reporting. This is not about religion – this is about terror and keeping our country safe.”

According to an analysis posted in the Washington Post:

“The other six countries — Iraq, Iran, Sudan, Libya, Yemen and Somalia — are not specifically named. Instead, the order refers to sections of the U.S. code:”

“Four countries were identified by Congress, in a bill signed by Obama, and then the Obama administration added three more. But Obama — and Democrats in Congress — wanted to require greater visa scrutiny of people who had traveled to those countries.”

So, in fact, the infamous list of 7 banned countries, was based on actions of Congress taken under the Obama administration and by Obama and Democrats. Please note that in Trump’s January 29 defense of his immigration order, he stated:

“There are over 40 different countries worldwide that are majority Muslim that are not affected by this order.”

If Trump had been targeting Muslims only, as so many falsely accuse him of, he could have easily added other predominately Muslim countries such as Pakistan, Afghanistan and Saudi Arabia, all known as homes to Islamic terrorists including those involved in the 9/11 attack on the United States.

It’s obvious to anyone with a brain willing to listen or actually investigate the truth before repeating erroneous and hateful rhetoric, that President Trump did not target Muslim nor did he come up with the list of 7 nations, but relied on information from the Obama administration.

Perhaps the blame lies more with Barack Obama and the Democrats than with Trump?