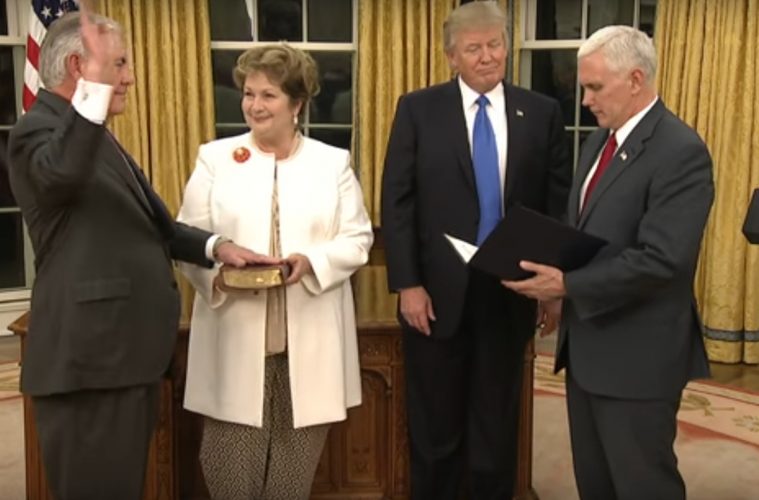 Tillerson Sworn in as Secretary of State

After so many Democrats and Republicans expressed concerns and reservations about Rex Tillerson as President Donald Trump’s nominee for Secretary of State, he was confirmed by the Senate this week and sworn into office Wednesday by Vice President Mike Pence.

Rex Tillerson was sworn in as the Trump administration’s secretary of state Wednesday evening after having been confirmed by the Senate earlier in the day.

“It’s time to bring a clear-eyed focus to foreign affairs,” President Donald Trump said at a White House ceremony, adding, “All of us are better off when we act in concert and not conflict. There’s rarely been conflict in the world like we see today. Very sad.”
Vice President Mike Pence gave the oath of office to Tillerson.
The former ExxonMobil CEO — who was confirmed in the Senate by a vote of 56 to 43, with all Republicans in support and most Democrats voting against him — fills one more slot on Trump’s national security team despite questions about his approach to Russia and state sponsors of terror, such as Iran.
Read More Here