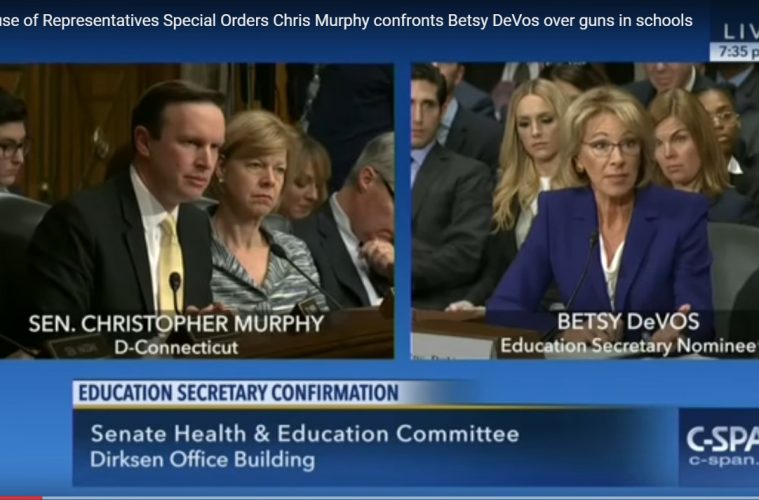 Democrats and liberals have typically over-reacted to answers Betsy DeVos gave the Senate committee in her confirmation hearing for Secretary of Education.

Before DeVos ever entered the committee room, Democrats were loaded for bear, so to say, and planned to shoot down her nomination before the hearings every started. Since DeVos is not directly affiliated with the socialist organization known as public education, they were determined to block her nomination because her conservative views could definitely disrupt the planned socialist indoctrination of another young generation. Senate Democrats were braced and ready to pounce on anything and everything DeVos said. They were prepared to twist her words in ways to make her look unacceptable, even if it ruined her successful career.

“Do you think that guns have a place in or around schools?”

“That’s best left to locales and states to decide.”

OH MY GOODNESS! Did DeVos dare suggest that states have rights to make their own decisions? Suggesting states have rights had to seer the ears of liberal Democrats like Murphy like a silver cross seers the chest of a vampire in the movies. The pain must have been excruciating forcing Murphy to continue to press the issue in hopes of turning the states’ right issue on its ear.

“You can’t say definitively today, that guns shouldn’t be in schools?”

Devos referred back to an earlier question in her response to Murphy, saying:

“I will refer back to Senator Enzi and the school he was talking about up in Wapiti, Wyoming. I would think, I would imagine that there’s a gun in the school to protect from potential grizzlies.”

WOW! Democrats and the liberal media attacked DeVos grizzly response like piranha on a wounded animal that fell into the Amazon River. I heard two different news anchors ridicule DeVos’s response, both sarcastically commenting about how many schools in the nation have problems with grizzly bears.

The point they are missing is that different schools in different areas all have their own unique problems. When I worked for a utility in Arizona, I had to go onto several high school campuses in Phoenix that had 8-foot-high wrought iron fences and armed security guard at the few gated entrances. Other schools have metal detectors which every student must pass through before entering the school.

Sen. Murphy is from Connecticut, the home of the infamous Sandy Hook Elementary school mass shooting. Every liberal uses that incident to support the idea of gun free school zones. However, none of these same liberals, including Murphy can honestly answer the question of how many of those young kids or teachers could have been saved if some of the faculty or staff had been trained and armed? I’ve yet to find a liberal anti-gun Democrat who could answer my question of why Obama’s girls have been attending a school with numerous armed guards on duty at all times, but what about schools that can’t afford to pay for armed guards. Wouldn’t the same thing be accomplished if teachers and faculty were properly trained and armed?

DeVos is obviously a fan of the 2nd and 10th Amendments – right to bear arms and the rights of states over the federal government. No wonder Democrats are after her scalp.