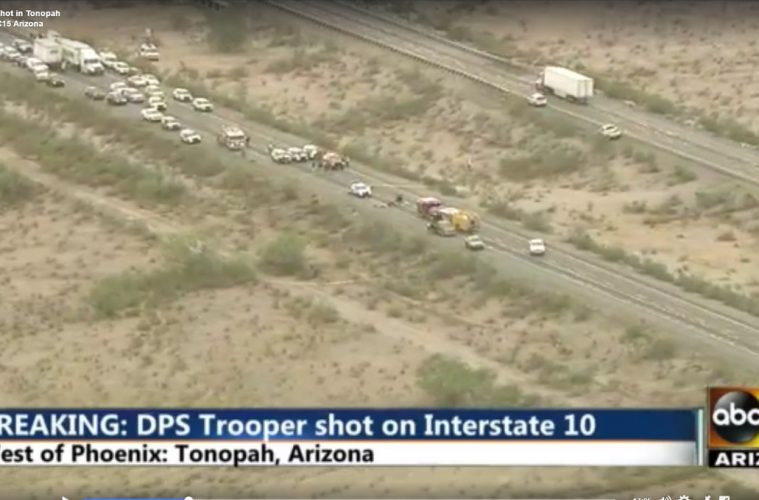 Stretches of Interstate 10 enters Arizona in the southeastern corner of the state, runs to Tucson, up to Mesa and Phoenix and then heads on westward to Los Angeles, California. The section of the highway leaving the Phoenix metropolitan area is an open, fairly barren Sonoran Desert. That type of open desert terrain makes it easy to lull a motorist to sleep from the monotony of the scenery.

About 50 miles west of Phoenix is the small community of Tonopah, which is known for some irrigated farming and being near the Palo Verde Nuclear Power Plant. Before the construction of the power plant, irrigated farming was the mainstay of the community. I made a number of trips to the Tonopah area to help reduce the coyote and badger populations. The coyotes were shot and the badgers were trapped and usually relocated to other areas. Due to the number of illegal aliens, drug traffickers and drunk drivers on the interstate, I often traveled with a loaded gun next me and it appears I’m not the only one.

Sometime prior to 4am Thursday morning, Department of Public Safety Officer Edward Anderson responded to a call for a traffic accident. He arrived upon the scene on Interstate 10 near Tonopah to find a car rolled over off the road. Anderson began blocking off 2 lanes of traffic. As he was setting the flares on the roadway, a man ambushed the officer and shot him in the right shoulder and chest. Then the man launched a physical attack of the officer, taking him down to the pavement. As other motorists pulled up on the scene, they saw the man on top of the wounded officer, banging his head on the pavement.

Fortunately for Officer Anderson, one of those motorists had a gun in his car. He fetched his car and shot the man assaulting the officer. Another good citizen, Brian Schober, who works in the medical field, stopped and rendered aid to Officer Anderson and then asked Anderson where his police radio was. The armed motorist then used Anderson’s radio to call for help and notify the DPS that Anderson had been shot and needed medical care. He told them to send a helicopter.

Schober said that the other motorist with gun, stood over the wounded assailant, making sure he didn’t hurt anyone else. Referring to the assailant, Schober stated: