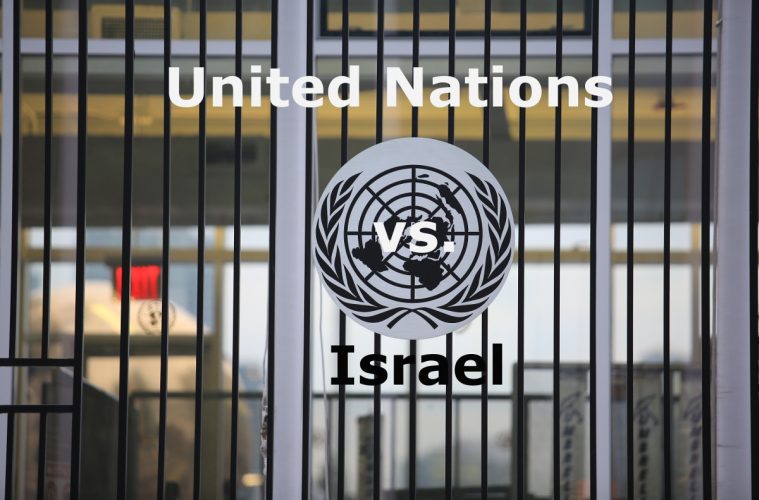 What Should or Could Trump Do about UN Resolution Against Israel?

Last week, Barack Hussein Obama continued to demonstrate his affinity for his Muslim friends and his social war against America’s one-time ally, Israel. Ever since the nation of Israel was re-established in 1948, the US and Israel have been allies. The US has largely supported Israel over the years as they have responded to the many attacks from their Muslim neighbors.

During the famous 6 Day War in 1967, the US stood behind Israel and their swift conquest of their enemies. Egypt, Jordan and Syria decided they were going to destroy the Jewish nation in their midst, but Israel turned the tide against them, virtually destroying the entire Egyptian air force. During the short-lived conflict, Israel not only defended their land, they actually expanded their border by conquering the Gaza Strip, Golan Heights and Sinai Peninsula. Eventually, Israel returned the Sinai Peninsula to Egypt but they continue to hold the Golan Heights and Gaza Strip, but their Muslim neighbors want them returned. Possession of these pieces of real estate have been a source of contention between Israel and many Palestinians.

Over the years, there have been a number of peace accords and agreements, most of which were first violated by Palestinian Muslims. While much of the liberal and Muslim supporting world has sided with the Palestinians, the US remained faithfully by Israel’s side until Barack Hussein Obama assumed residence in the White House. There is no doubt among many Americans, including myself, that Obama is and always has been a Muslim and as such has worked to destroy the bond between the US and Israel while at the same time bending over backwards to make friends with the Muslim nations that have vowed to destroy Israel and the US.

In 2012, Congress had frozen nearly $200 million that was supposed to go to Palestinian efforts in the Middle East. After the United Nations voted against Palestinian membership, Congress freed up part of that money but not all of it. Obama then violated the US Constitution, his authority and the authority of Congress by overriding Congress and freeing up the remaining assets for the Palestinians.

Two years later in 2014, Hamas, the Islamic militant Palestinian organization told Israel to return their pre-1967 boundaries or face years of war. To no surprise, Obama sided with the Hamas demand instead of defending Israel’s right to keep the land they conquered in war. Incidentally, Obama’s half-brother Malik, has been seen in public numerous times wearing a Hamas scarf bearing the following Palestinian inscriptions:

This is a common Palestinian statement meaning that there is no Israel and Malik has worn it at more than one public event so it isn’t just a one-time fluke. Shoebat says there can be no doubt that Malik Obama has definitely sided with Hamas and shares their vow to wipe Israel off the face of the earth.

When the UN voted this past week to censure Israel for the settlements they have been building on their occupied land, the United States abstained from voting. Had they voted, they could have blocked the resolution against Israel.

So, what can or what should President-elect Donald Trump do in response to the UN resolution against Israel? Michael Rubin suggests the following to which I would add one more action that the United States should take:

To this I would add that the US should withdraw from the United Nations and kick them off US soil. The UN has worked hard to usurp American sovereignty over our own nation and people. The US spends billions of taxpayer dollars every year on the United Nations and their many anti-Christian, anti-American, anti-moral projects and resolutions. The only reason America lost the Vietnam War is because the United Nations was in control and tied our hands at what our servicemen and women could and could not do. America ended up losing over 50,000 lives and countless other injuries as a result of the UN. Let’s get rid of the UN altogether and save billions of tax dollars and American lives.

Let’s take care of America first before we try to solve the world’s problems!