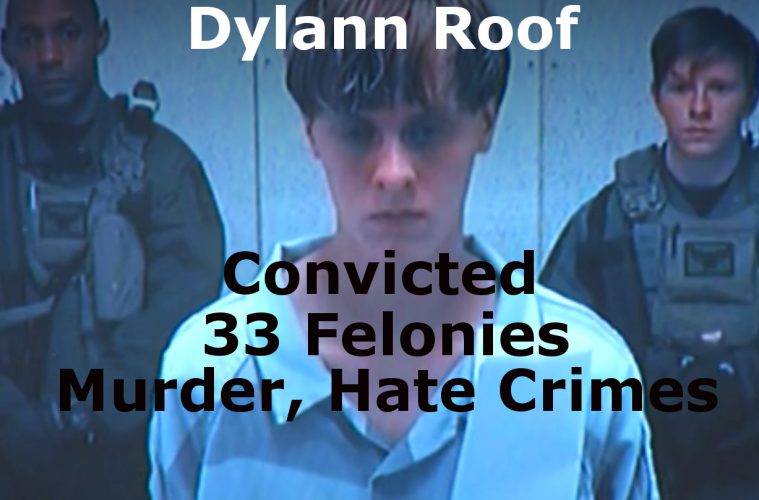 Dylann Roof was just found guilty of all 33 counts of murder and hate crimes. Should he be sentenced to death or life in prison?

On June 17, 2015, a group of black parishioners were joined in their weekly Wednesday night Bible study at the Emanuel AME Church in Charleston, South Carolina. A young man with a troubled look on his face walked into the church and was invited to join in the Bible study. Instead, the young man, Dylann Roof, pulled out a gun and began shooting the black parishioners. When the shooting was over, 9 members of the small church were dead and 1 other was wounded. Among the dead was Senior Pastor and State Senator Clementa C. Pinkney. The community has come to refer to the victims of the slaughter as the Charleston Nine.

The survivors of the shooting quickly identified Roof and a massive manhunt was launched by law enforcement. Roof’s father and uncle also contacted the FBI to verify Roof’s identity. Roof was arrested the following morning over 200 miles away from the scene of his carnage. When Roof was arrested, law enforcement found a gun in his car.

Upon further investigation of Dylann Roof, law enforcement found an abundance of evidence pointing to Roof’s guilt. Included in the evidence was Roof’s manifesto which stated his racist reasons for his targeting the black parishioners. His manifesto, posted on the website The Last Rhodesian which apparently has been removed. The manifesto starts out:

“I have no choice. I am not in the position to, alone, go into the ghetto and fight. I chose Charleston because it is most historic city in my state, and at one time had the highest ratio of blacks to Whites in the country. We have no skinheads, no real KKK, no one doing anything but talking on the internet. Well someone has to have the bravery to take it to the real world, and I guess that has to be me.”