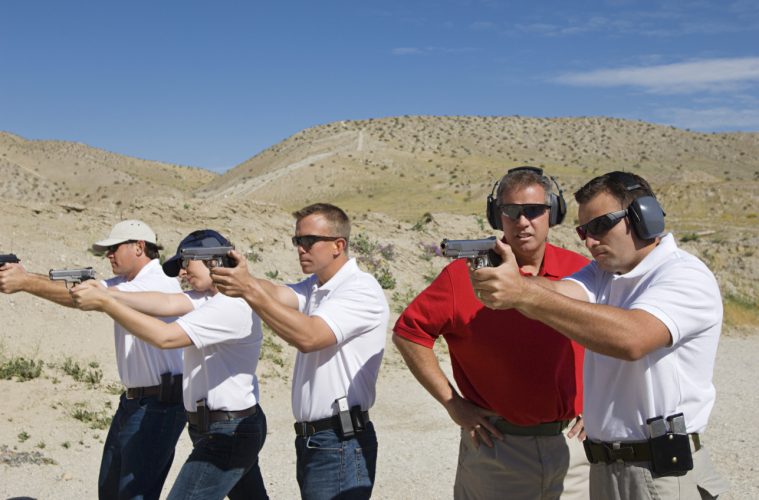 After the senseless slaughter of twenty young kids and six adults at Sandy Hook Elementary School in December 2012, there have been calls to ban all guns and calls to allow teachers and faculty to be trained and armed.

Barack Obama and his liberal anti-Second Amendment minions called for all kinds of gun controls and for more gun free zones to be created throughout the country. It’s ironic that Obama and some of the same liberal leaders send their kids to schools that are well protected by armed security, but they don’t want the same for your kids.

On the other side of the argument, many gun rights groups have been pushing for the training and arming of school teachers and faculties. One of the things they point out that it usually takes law enforcement anywhere from 5 to 15 minutes to respond to calls and by that time, an active shooter can kill and wound a lot of kids and teachers.

In July 2013, South Dakota became the first state to pass legislation to allow school employees to be trained and armed. I live in northern Kentucky, just south of Cincinnati, Ohio and know that a couple years ago, Ohio also passed legislation to allow for the proper training, licensing and arming of school faculty and staff.

A growing number of schools and teachers are taking the necessary steps to protect your kids. In Ohio, some teachers are spending their summer attending the Tactical Defense Institute run by John Benner. So far over 300 people, including teachers, have completed the first level of training and are now licensed to carry concealed weapons.

They aren’t just being taught how to shoot a gun, but how to tactically shoot an intruder while moving and protecting their students. Benner told the local media:

“This is more about tactics than it is shooting. These people are training for one single event and that event hopefully will save lives,”

“I’ve had people tell me, ‘Oh, teachers can’t do that. They sacrifice their lives for their kids all the time.’ Look at Sandy Hook, that’s a perfect example. I think there was four that literally sacrificed their lives, stood in front of their kids or tried to attack a guy with a rifle. That doesn’t work very well.”

Tracy is a teacher from a northern Ohio school undergoing training at the Tactical Defense Institute. When asked why, she responded:

“I want to be the best that I can when it comes to protecting my kids, my personal children, my classroom children and this is where I come to do it.”

Hanover School District 28, located about 30 southeast of Colorado Springs, just voted on a resolution allow for the training of teachers and staff to carry concealed guns on campus. Before voting on the resolution, the district took a poll of students, staff, parents and people from the community to see how they all felt about the matter.

At a board meeting Wednesday night, the board voted 3-2 in favor of the resolution. One remaining obstacle may be overcoming a Colorado state law that forbids anyone from carrying concealed weapons on public elementary or public school grounds unless they are a security guard for the school. Perhaps the resolution should read so as to make all teachers and faculty that have been properly trained and armed to be considered as security guards in addition to their regular educational duties.

If politicians and school officials really want to protect their students from the dangers of a school shooting, the only real way to do it is to arm teachers and faculty. Passing absurd laws about background checks, banning certain types of guns and magazines, etc. doesn’t do anything to stop someone determined to carry out their attack. For centuries, it has been known and proven time and again that the only good defense is a strong offense and in the case of protecting America’s students, that means arming those that are with the students on a daily basis.

Like Benner said, it took police 14 minutes to respond to Sandy Hook Elementary School. How many lives could have been saved if a number of the teachers and faculty had been armed? It’s possible that at least one of them could have taken Lanza down early on and saved the lives of some of the students and faculty that were gunned down. It’s also very likely had Lanza known the staff at Sandy Hook were armed and trained that he would not have attacked the school in the first place and the 20 kids and 6 staff would all still be alive.

If your kids attend a public school, are they protected from an active shooter or are they easy targets in a gun free zone? Wouldn’t you want someone there at the school to be armed and ready to protect them from some crazy person? Aren’t your kids’ lives just as important to you as Obama’s are to him? Get active and make sure your state and schools pass legislation and resolutions to train and arm teachers and faculty to help protect your kids. After all, when is the last time you heard of an active shooter targeting an armed school?