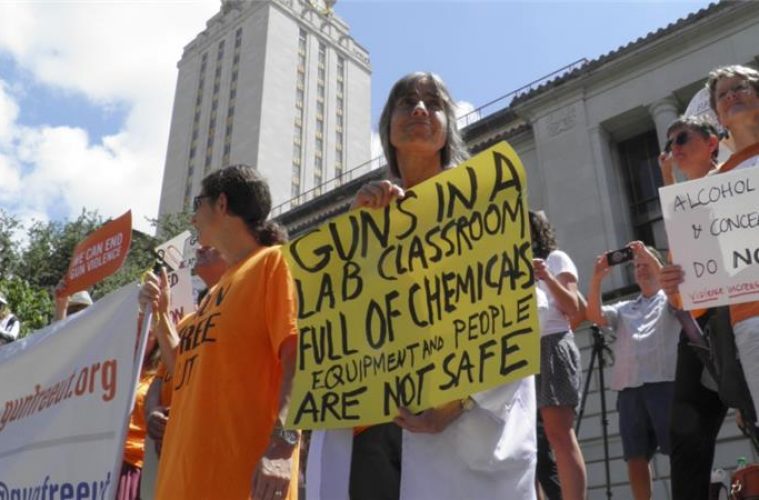 Liberals are Fuming at the New Campus-Carry Law in Texas

The University of North Texas (UNT) has just determined to create a safer campus life by allowing a campus-carry law, which went into effect on August 1. While this is the best decision the Lonestar state could have made, some people are pressing concerns.

Todd Moye, a history teacher at UNT is not happy about the new law.

Moye, whose curriculum at the University of North Texas (UNT) centres around race relations in US history, told Al Jazeera that he worries especially about the presence of guns during lectures on topics that arouse strong feelings.

“Will I have to censor myself or tamp down discussions?” he asked.

“I’ve never had to lead a discussion while wondering whether someone in the room might get upset enough to shoot a fellow student or me. These are not the kinds of questions I want to be thinking about; I want to concentrate on how I can best teach my students.”

While the liberals begin to whine and express their feelings on how they feel uncomfortable around guns, their cries are falling on deaf ears.

The law is not anything new, as far as regulations go. The individual must be 21-years-old or up, and have an updated, valid permit to carry a concealed weapon.

While public universities are obliged to respect the law, private academic institutions have the chance to opt out. Dozens of private universities in Texas have decided to ban campus carry, while only one will permit it.

State law still bans weapons from some campus areas, such as hospitals and sporting events. A handful of schools have also allowed professors to ban concealed carry in their offices as part of gun-free zones.

This is fine and dandy. They have the right, as an American, to express and exercise their free will. However, by creating the gun free zones, this could put them at risk of the newer law being passed that would hold them accountable for any one hurt in this “gun-free zone,” due to not being able to protect themselves from an attacker. Read more about that law here.

Not to mention, this can only make the campus safer. If a lunatic planned to bring a gun to school to shoot someone, then they would bring it regardless of whether the school told them they were allowed to have guns, or not. This law will allow students and faculty to exercise their 2nd amendment right, and protect themselves.
For more on this story, click here.