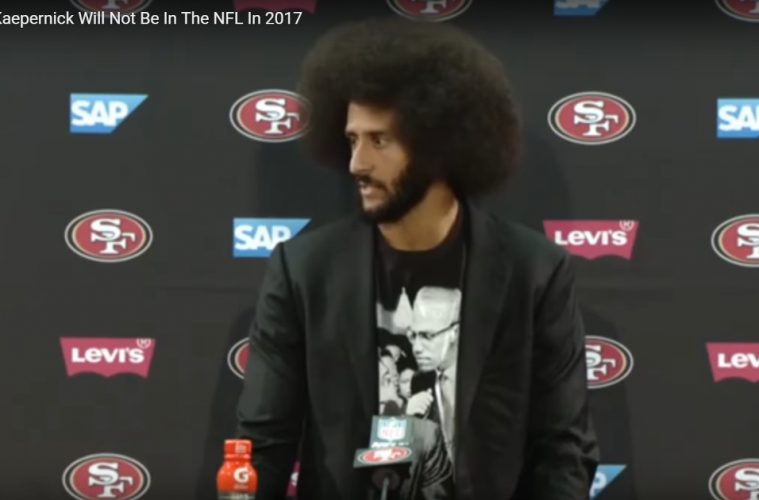 Boo Hoo! Kaepernick’s Unemployment Likely Due To His Insult To America

Last year, Colin Kaepernick displayed his hatred for America, everything it stands for and his disrespect for the millions of Americans who over the years have sacrifice life, limb and more to defend the American flag and our nation. instead of standing for the singing of the National Anthem, Kaepernick made a public display of himself by kneeling in protest.

He claimed his protest was over police targeting black people unfairly. However, the incidents he cited as reason for his protest all had one thing in common – the black person chose to disobey or not to cooperate with the police. Instead, they resisted orders which instantly intensified the situation. In the case of Michael Brown, he physically attacked Officer Darren Wilson, fracturing his eye socket.

Kaepernick’s actions and comments displayed the rank hypocrisy of his life. He claims to be a Christian, having been baptized Methodist, confirmed Lutheran and attended a Baptist church in his younger days. He claims that his faith is important to him and the basis for the way he plays football.

However, in 2015, Kaepernick began having a personal relationship with a black Muslim activist by the name of Nessa Diab. She is known for being an outspoken black activist and Muslim activist. Obviously, her radical activism influenced Kaepernick, who ignored his alleged Christian faith to take up Nessa’s cause, leading him to kneel during the national anthem and become a pariah to millions of Americans.

His political views were quite confusing as he condemned Hillary Clinton and said she belonged in jail, but he also refused to vote for Donald Trump. Actually, after the election, it was revealed that he didn’t vote at all. In my book, if you don’t vote, you don’t have a right to complain.