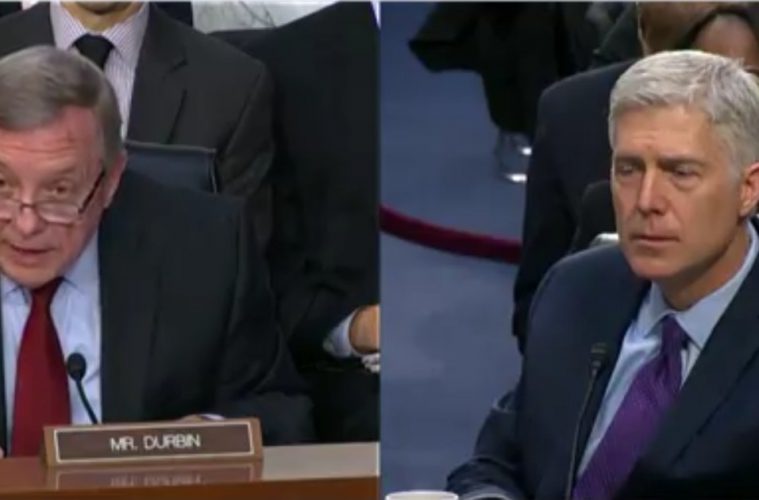 Democrat Senators are determined to destroy Judge Neil Gorsuch not because of anything Gorsuch has done or said, but solely because he was appointed by President Trump. Sen. Dick Durbin, a true Obamanite, blasted at Gorsuch during his confirmation hearing and Gorsuch quickly batted down his accusation.

President Trump’s Supreme Court nominee on Tuesday swiftly batted down an accusation made by a former Obama administration staffer that he once told students women manipulate maternity leave.

The allegation, which came to light the day before Judge Neil Gorsuch began his Senate confirmation hearing, was made by a former law student of Gorsuch, Jennifer Sisk, who previously worked for a Democratic senator and the Interior Department during then-President Barack Obama’s tenure.

“Those are not my words and I would never have said them,” Gorsuch told Sen. Dick Durbin, D-Ill.

Sisk, a 2016 graduate from the University of Colorado Law School, charged that Gorsuch said employers should ask female interviewees if they plan on having a family and also contended that “’many’ women use their companies for maternity benefits and then leave the company after the baby is born.” Sisk’s allegation was posted as a letter – and soon refuted by another student in the class and disputed by female law clerks who had served under Gorsuch.