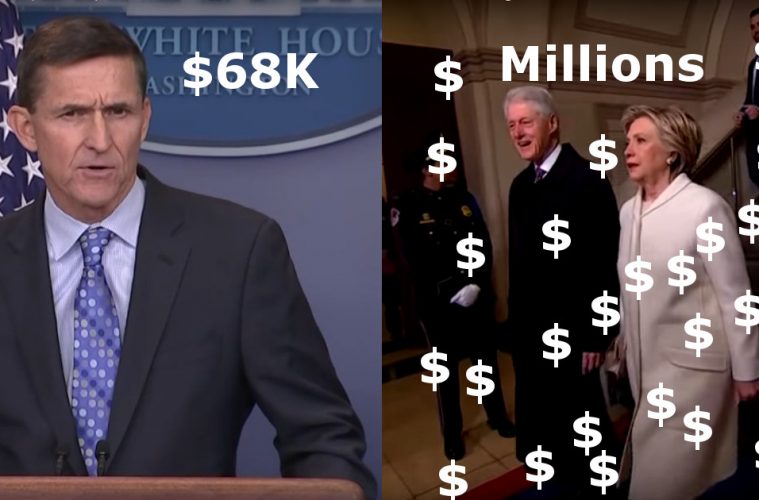 The mainstream media continues their feeding frenzy on Gen. Michael Flynn (Retired) even after they forced his resignation as President Donald Trump’s National Security Advisor. Democrats have joined the feeding frenzy like sharks gathering at the smell of blood, and it is Flynn’s, Trump’s and all GOP blood they are after.

According to the very liberal left favoring Chicago Tribune:

“Michael Flynn, who was forced to resign as national security adviser amid controversy over his contacts with Russia’s ambassador, collected nearly $68,000 in fees and expenses from Russia-related entities in 2015, a higher amount than was previously known, according to newly released documents.”

“The records show that the bulk of the money, more than $45,000, came from the Russian government-backed television network RT, in connection to a December 2015 trip Flynn took to Moscow. Flynn has acknowledged that RT sponsored his trip, during which he attended a gala celebrating the network’s 10th anniversary and was seated near Russian President Vladimir Putin. His speakers bureau took a cut of the fee.”

“The newly released documents show that Flynn was also paid $11,250 that year by the U.S. subsidiary of a Russian cybersecurity firm, Kaspersky Lab, and another $11,250 by a U.S. air cargo company affiliated with the Volga-Dnepr Group, which is owned by a Russian businessman. The cyberfirm and the airline said the payments were made for speeches Flynn delivered in Washington, D.C.”

Is this really any different than the Clinton’s making millions of dollars in speaking fees from around the world, including in nations that are hostile to the United State? Consider just this one report made in 2015:

“Traveling abroad on official business as secretary of state, Clinton often visited Boeing facilities and made a pitch for the host country to buy Boeing jets. During one visit to Shanghai in May 2010, she boasted that ‘more than half the commercial jetliners operating in China are made by Boeing.’”

“A sales plug in Russia in 2009, though, may have proved especially fruitful. While touring a Boeing plant, Secretary of State Clinton said, ‘We’re delighted that a new Russian airline, Rossiya, is actively considering acquisition of Boeing aircraft, and this is a shameless pitch.’”

“This chain of events is raising new questions for Clinton, and Boeing, as the former secretary of state launches her 2016 presidential campaign. The Boeing deal only adds to a growing list of business deals involving Clinton Foundation donors now coming under scrutiny.”

In 2015, this report was also disclosed by the very liberal CNN:

“The Clinton Foundation confirmed Thursday that it received as much as $26.4 million in previously unreported payments from foreign governments and corporations for speeches given by the Clintons.”

“…since 2002, Bill, Hillary and Chelsea Clinton gave 97 speeches benefiting the foundation, earning anywhere from $10,000 to $1 million dollars in fees.”

“Former President Clinton was the biggest earner for speeches, giving three that brought in anywhere from $500,000 to $1 million.”

“Both he and his wife gave a smattering of speeches to foreign companies and other organizations for anywhere from $250,000 to $500,000. Bill Clinton spoke to Thailand’s Ministry of Energy, China Real Estate Development Group, Ltd, and Qatar First Investment Bank; Hillary Clinton spoke to Goldman Sachs, Citibank and JP Morgan Chase, among others.”

“According to foundation officials, the income — at least $12 million and as much as more than twice that — was not disclosed publicly because it was considered and tallied for tax purposes as revenue, rather than donations.”

“In April, the head of a Canadian charity that donates to the foundation acknowledged that it didn’t disclose any of the 1,100 largely foreign donors that ultimately contributed $2.35 million to the broader organization through the Canadian group.”

These are only a few of many reports about the Clinton’s reaping millions for their foundation and for themselves from foreign governments and foreign companies, but little was done or said about their foreign connections.

However, let one conservative Republican who received only a fraction of what the Clinton’s reaped, for legitimate services and the mainstream media and Democrats are ready to have Flynn drawn, quartered, tarred and feathered, hung, crucified, burned at the stake and more.

Clearly there is a huge difference in the standards that conservative Republicans are held to compared to what liberal Democrats are held to.