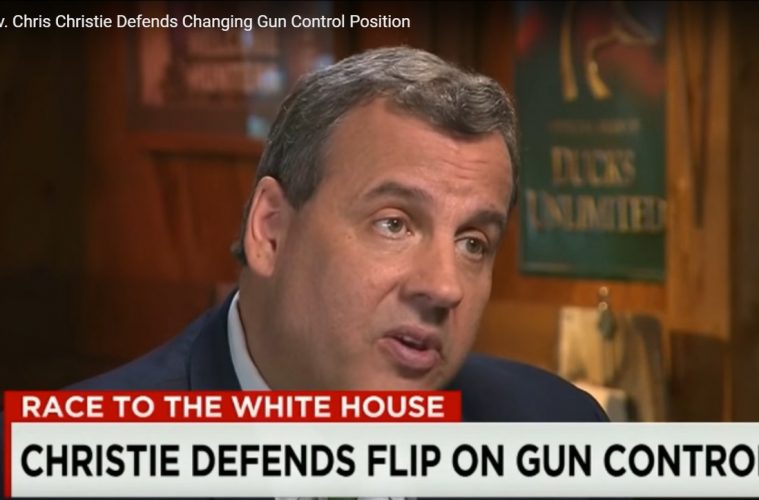 When you hear the name Chris Christie, what comes to mind? Do you think about the Bridgegate scandal or his unsuccessful bid for the Republican presidential ticket? Do you think about some of his liberal views such as his extended protection and association of some radical Muslims or do you think about his history of anti-Second Amendment actions?

Would you be surprised if you found out that in the past 25 years of public politics that Christie’s views on gun rights and gun control have evolved and might possibly still be evolving towards the Second Amendment?

In 1993, while working as an attorney for a law firm in Cranford, New Jersey, Christie tried unsuccessfully to get on the ballot as a candidate to challenge then state senate majority leader, Christie appeared to be very pro-gun control. As part of his state senate bid, Christie issued a press release stating:

“The issue which has energized me to get into this race is the recent attempt by certain Republican legislators to repeal New Jersey’s ban on assault weapons.”

“In today’s society, no one needs a semi-automatic assault weapon.”

In 1995, Christie tried again to get elected to the state assembly, but failed. During that campaign, he said that making assault weapons legal to own was dangerous, crazy and radical.

From 2002 to 2008, Christie served as the US Attorney for the District of New Jersey. He was appointed to the position by then President George W. Bush. Whether it due to Bush’s pro-gun stand or Christie’s position as US Attorney, he was not as vocal on his personal views on gun control and gun rights.

In 2009, Christie ran for Governor of New Jersey. During the campaign, then Gov. Jon Corzine accused Christie as standing with the NRA on gun rights. Christie quickly denied the allegations and pointed out that he supported all of New Jersey’s gun control laws, he was opposed to ownership of assault weapons and he opposed concealed carry permits in New Jersey.

Less than a month before the 2009 election, Christie stated:

“Listen, I favor some of the gun control measures we have in New Jersey.”

In January 2010, Christie was inaugurated as New Jersey’s 55th governor and his views on gun control began to evolve even more.

In December 2010, Christie shocked liberals by commuting the sentence of Brian Aitkens who had been sentenced to seven years in prison for having 3 unloaded handguns and hollow-point ammunition in the trunk of his car. Aitkens lived in Colorado but was visiting his mom and was concerned for her well-being when he called police. The police then searched his car and discovered the guns and ammo. He was subsequently convicted of being in possession of illegal firearms, illegal ammunition and illegal large capacity ammunition. Speaking through his spokesman, Christie commented about Aitken’s when he commuted his sentence, saying:

“Considering both Aitken’s offense and punishment, the governor believes this is the most compassionate and just solution.”

In 2013, Christie reversed his earlier position on .50 caliber assault rifles and vetoed the ban he had previously made. In his statement, he indicated that he was actually listening to facts:

“Tellingly, the Legislature points to no instance of this class of firearms being used by even a single criminal in New Jersey. The wide scope of this total ban, therefore, will not further public safety, but only interfere with lawful recreational pastimes.”

In 2014, Christie refused to defend the state’s ‘justifiable needs’ requirement for obtaining a permit to own a gun. Later that year, he also vetoes his previous ban against large capacity magazines.

In 2015, Christie pushed to make changes to the state’s gun regulations that would expedite the permits for victims of domestic violence in order to allow them means of self-protection. A month later, he announced that he planned to pardon all legal gun owners that had been arrested under the state’s tough gun transport laws.

In January 2016, Christie, who was still making a run for the White House, condemned Barack Obama’s executive order on gun control. Later that year, he vetoed a bill requiring gun retailers to stock and start selling smart guns.

In 2017, Christie has now announced through the state attorney general that they were making changes to state gun regulations to allow people who are under a serious threat to carry a handgun. This is a huge reversal from his earlier stands against any handguns or concealed carry permits.

In the last few years, it seems that Chris Christie’s views on gun control and gun rights has been evolving in the right direction, especially with the latest more to at least allow some New Jersey citizens to exercise their Second Amendment rights to own a gun and protect themselves.