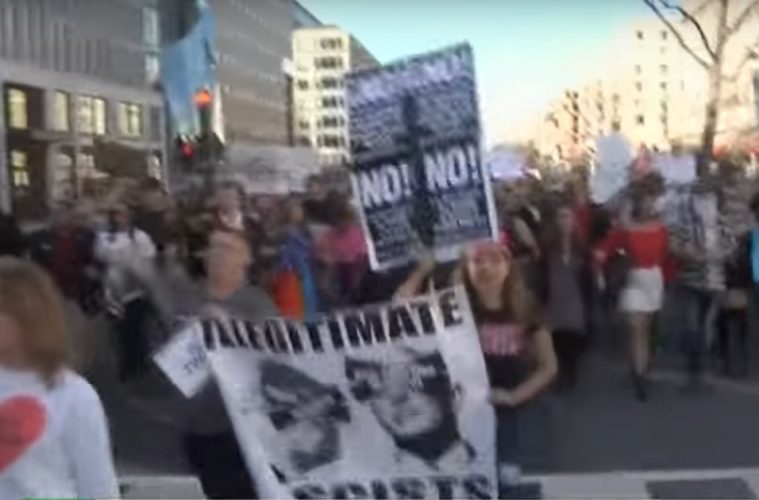 Years ago, I was helping round up a herd of cattle in the desert of southeast Arizona when a summer monsoon storm crested the distant hills. The storm announced itself with a huge flash of lightning several miles away. In that split few seconds before the deafening thunder shook the ground, our trail boss yelled for us to hold on for dear life and grab tight on the reigns of our horses because a stampede was coming. He was right and we spent the next couple of hours trying to gather the scattered herd.

When the headlines came out reading that President Donald Trump had issued his second executive order on immigration and refugees, I instantly recalled the warning from Hank, our trail boss. It’s virtually guaranteed that liberals will once again stampede the streets of America like cattle frightened by a bolt of lightning a mile away. They’ll follow the herd leaders and blindly run without knowing why they are running or where they are running to. The danger is that in too many stampedes, innocent people sometimes get trampled, hurt and killed.

By the authority vested in me as President by the Constitution and the laws of the United States of America, including the Immigration and Nationality Act (INA), 8 U.S.C. 1101 et seq., and section 301 of title 3, United States Code, and to protect the Nation from terrorist activities by foreign nationals admitted to the United States, it is hereby ordered as follows:

(b)  On January 27, 2017, to implement this policy, I issued Executive Order 13769 (Protecting the Nation from Foreign Terrorist Entry into the United States).

(i)  Among other actions, Executive Order 13769 suspended for 90 days the entry of certain aliens from seven countries:  Iran, Iraq, Libya, Somalia, Sudan, Syria, and Yemen.  These are countries that had already been identified as presenting heightened concerns about terrorism and travel to the United States.  Specifically, the suspension applied to countries referred to in, or designated under, section 217(a)(12) of the INA, 8 U.S.C. 1187(a)(12), in which Congress restricted use of the Visa Waiver Program for nationals of, and aliens recently present in, (A) Iraq or Syria, (B) any country designated by the Secretary of State as a state sponsor of terrorism (currently Iran, Syria, and Sudan), and (C) any other country designated as a country of concern by the Secretary of Homeland Security, in consultation with the Secretary of State and the Director of National Intelligence.  In 2016, the Secretary of Homeland Security designated Libya, Somalia, and Yemen as additional countries of concern for travel purposes, based on consideration of three statutory factors related to terrorism and national security:  “(I) whether the presence of an alien in the country or area increases the likelihood that the alien is a credible threat to the national security of the United States; (II) whether a foreign terrorist organization has a significant presence in the country or area; and (III) whether the country or area is a safe haven for terrorists.”  8 U.S.C. 1187(a)(12)(D)(ii).  Additionally, Members of Congress have expressed concerns about screening and vetting procedures following recent terrorist attacks in this country and in Europe.

(ii)  In ordering the temporary suspension of entry described in subsection (b)(i) of this section, I exercised my authority under Article II of the Constitution and under section 212(f) of the INA, which provides in relevant part:  “Whenever the President finds that the entry of any aliens or of any class of aliens into the United States would be detrimental to the interests of the United States, he may by proclamation, and for such period as he shall deem necessary, suspend the entry of all aliens or any class of aliens as immigrants or nonimmigrants, or impose on the entry of aliens any restrictions he may deem to be appropriate.”  8 U.S.C. 1182(f).  Under these authorities, I determined that, for a brief period of 90 days, while existing screening and vetting procedures were under review, the entry into the United States of certain aliens from the seven identified countries — each afflicted by terrorism in a manner that compromised the ability of the United States to rely on normal decision-making procedures about travel to the United States — would be detrimental to the interests of the United States.  Nonetheless, I permitted the Secretary of State and the Secretary of Homeland Security to grant case-by-case waivers

(iii)  Executive Order 13769 also suspended the USRAP for 120 days.  Terrorist groups have sought to infiltrate several nations through refugee programs.  Accordingly, I temporarily suspended the USRAP pending a review of our procedures for screening and vetting refugees.  Nonetheless, I permitted the Secretary of State and the Secretary of Homeland Security to jointly grant case-by-case waivers when they determined that it was in the national interest to do so.

(iv)   Executive Order 13769 did not provide a basis for discriminating for or against members of any particular religion.  While that order allowed for prioritization of refugee claims from members of persecuted religious minority groups, that priority applied to refugees from every nation, including those in which Islam is a minority religion, and it applied to minority sects within a religion.  That order was not motivated by animus toward any religion, but was instead intended to protect the ability of religious minorities — whoever they are and wherever they reside — to avail themselves of the USRAP in light of their particular challenges and circumstances…

Sec. 2.  Temporary Suspension of Entry for Nationals of Countries of Particular Concern During Review Period.  (a)  The Secretary of Homeland Security, in consultation with the Secretary of State and the Director of National Intelligence, shall conduct a worldwide review to identify whether, and if so what, additional information will be needed from each foreign country to adjudicate an application by a national of that country for a visa, admission, or other benefit under the INA (adjudications) in order to determine that the individual is not a security or public-safety threat.  The Secretary of Homeland Security may conclude that certain information is needed from particular countries even if it is not needed from every country.

(c)  To temporarily reduce investigative burdens on relevant agencies during the review period described in subsection (a) of this section, to ensure the proper review and maximum utilization of available resources for the screening and vetting of foreign nationals, to ensure that adequate standards are established to prevent infiltration by foreign terrorists, and in light of the national security concerns referenced in section 1 of this order, I hereby proclaim, pursuant to sections 212(f) and 215(a) of the INA, 8 U.S.C. 1182(f) and 1185(a), that the unrestricted entry into the United States of nationals of Iran, Libya, Somalia, Sudan, Syria, and Yemen would be detrimental to the interests of the United States.  I therefore direct that the entry into the United States of nationals of those six countries be suspended for 90 days from the effective date of this order, subject to the limitations, waivers, and exceptions set forth in sections 3 and 12 of this order.

(d)  Upon submission of the report described in subsection (b) of this section regarding the information needed from each country for adjudications, the Secretary of State shall request that all foreign governments that do not supply such information regarding their nationals begin providing it within 50 days of notification.