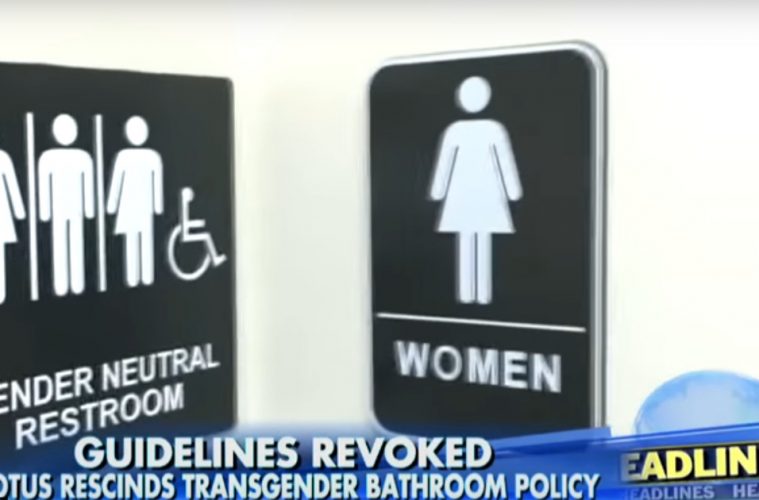 The issue of transgender use of bathrooms and locker rooms is evidence that the liberal left cares nothing for women, their safety or their rights. The same liberals point their fingers at conservatives and Republicans and accuse them of waging a war against women and women’s rights, when they are the ones that are waging the real war.

Many conservatives, Republicans and Christians have argued that allowing transgender individuals into the bathroom or locker room they identify with is a violation of their rights of privacy and it places them, their wives, daughters and sons in danger from sexual predators. Liberals counter by just arguing for the preferential treatment of a small minority and ignoring the dangers of wrongs involved.

The issue has once again surfaced when the Trump administration rescinded the federal mandates imposed by the Obama administration that forced all public schools to allow transgender students use the facilities of their choice. Liberals instantly began to complain, whine and stamp their feet, demonstrating that they have no clue what’s really happening.

All the Trump administration did was place the issue of transgender treatment in the hands of the states instead of the federal government. This is in compliance with the way the Founding Fathers intended the nation to be. They sought to maintain the power and authority of the states with a small federal government to help them and to provide protection of the nation.

However, some liberals argue that allowing transgenders to use the bathrooms or locker rooms of their choice poses no danger to women and children. However, they intentionally ignore the growing list of real-life incidents. According to a recent report:

The conservative Family Research Council has compiled a list of 21 incidents of men assaulting or violating women’s privacy in public bathrooms, warning that despite what activists claim, transgender-friendly policies do increase the risk of such crimes.

In a brief issued by the Family Research Council, they identify at least 21 such incidents in the US and several more in Canada. Their brief states:

“‘Gender identity’ non-discrimination laws—particularly those that apply to schools and ‘public accommodations’—authorize people to use sex-separated facilities (such as restrooms, locker rooms, and showers) that correspond to their subjective, psychological ‘gender identity,’ rather than their objective, biological sex.”

“This has led to concerns that such policies—particularly insofar as they permit biological males to use facilities designated for women or girls—could threaten the privacy and safety of the general public, and even lead to an increase in voyeurism and sexual assault. It is important to note that the concern is not that transgendered individuals are more likely to be sexual predators, but rather that sexual predators could exploit such laws by posing as transgendered in order to gain access to women and girls. Beyond this, when companies such as Target implement any-sex bathroom/dressing room policies, it encourages criminals to take advantage of these policies to commit crimes.”

“Transgender activists have scoffed at these suggestions, essentially denying that such incidents even occur, but below is a list of publicly reported incidents in which men violated the privacy of women in bathrooms, locker rooms, and other private spaces, demonstrating that the concern about safety and privacy is legitimate:”

Liberals who argue that transgender-friendly policies pose no danger need to sit down with the victims of the crimes that have already happened and explain to them that there was no danger of what happened to them. They also need to tell them that the rights of a very small minority are worth the risk they were put in.

These liberals are also extremely naïve. Today’s criminals use whatever means possible to carry out their crimes and perversions. Look at how many cybercrimes are committed every day. What about sexual predators using the internet to stalk young kids? What laws forbidding sex offenders from living or being near a school yet how many have been found to live near or frequent schools? Just look on the internet for a map of the sexual offenders in your area and you may be shocked. Now realize that these are only the ones who have registered where they live, and does not represent the thousands who don’t.

It should be obvious that sexual predators will take advantage of transgender-friendly policies to prey on women and children. It should also be obvious that supporters of transgender-friendly policies are the ones that care nothing about the safety of women and children and thus are the real ones waging a war against women and women’s rights, since women will no longer have the right to privacy in any public facility.