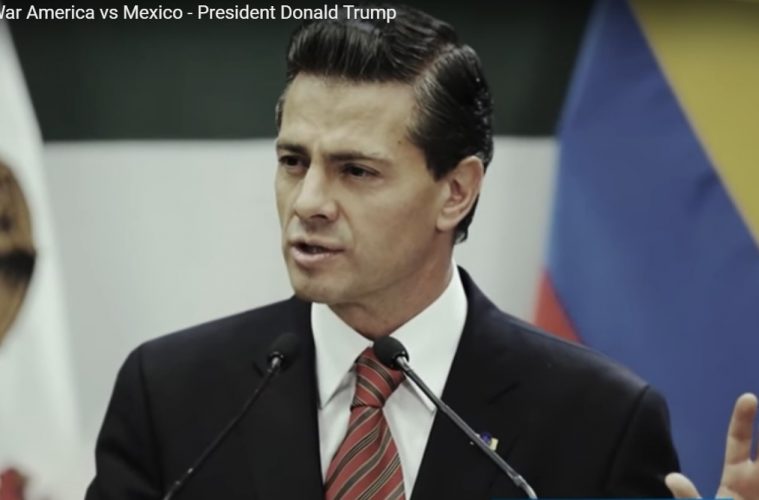 Real Reason Mexico Is Upset Over US Deportation of Illegals

As President Donald Trump works to fulfill many of his campaign promises, many liberals and foreigners are responding in anger and disbelief that America would dare have a President who would actually enforce our laws. The liberal mainstream media is busy reporting how upset Mexican officials are over the announcement to enforce federal immigration laws. They typically are reporting only their version of what’s really going on why Mexico is so upset over the upcoming deportations.

“Press reports are citing numerous examples of maligned Mexican machismo and other mental anguish sufferings, such as;

Specifically, according to the source-poor reporters at The New York Times, “Mr. Trump’s action was referred to by politicians and historians as a ‘an offense to Mexico,’ a ‘slap in the face’ and a ‘monument to lies.’”

The real reason for Mexico’s rebellion is that they don’t want many of the 11 million to 20 million illegals back and you really can’t blame them.

Not all illegals are Mexican. Thousands traveled from Central and South America through Mexico for the sole purpose of illegally crossing into the United States. For years, Mexico has done little to nothing to stop millions of their poor and criminals along with those from other countries from illegally crossing into the United States. In some cases, not all, the dregs of Mexican society have left their homeland to suck the life and money out of American cities, counties, states and the nation, like leaches such the blood out of unsuspecting victims.

The only reason Mexico’s President and Mexican people are insulted is that it means they’ll have to keep their poor and criminal elements in their own country. It will cost Mexico millions of dollars and hundreds of millions of pesos to take care of their poor, themselves.

But what the liberal mainstream press nor Mexican officials will admit is that some years, Mexico deported more illegal immigrants than the US did. Two years ago, it was reported:

“But what if I told you that Mexico has stricter immigration laws than the US and that they deport more illegals than we do? And what if I told you that entering the US is only a misdemeanor but entering Mexico illegally is a felony? Furthermore, Mexico’s President Enrique Peña Nieto has been trying to get the US to lessen our immigration laws in order to allow more of his people to come to our country.”

“According to a recent report, the US only deported 104,688 illegals in 2014 while Mexico deported 107,199 illegals just from Central America. Mexico takes a much harsher stand on people entering their country illegally but they don’t want the US to do the same.”

“Chris Cabrera of the National Border Patrol Council points out the hypocrisy between what Mexico does and what they want us to do. In a recent interview he stated:”

“‘It’s defies logic on his stance on how we should be as strong as they are’.”

The Mexican government has strict immigration laws which they vigorously enforce. In fact, I wish the US had and enforced the same immigration policies that Mexico has.

To begin with, Mexico requires that all immigrants have the economical means to support themselves. The US welcomes everyone, legal or illegal and then allows them to go on welfare and leech off the government and taxpayers. Over half of all immigrants in the US receive some form of welfare. This is not allowed in Mexico.

Secondly, Mexico requires immigrants to be both physically and mentally healthy. The US doesn’t care and will take anyone in any condition no matter how much it ends up costing taxpayers to support them.

Third, Mexico insists that all immigrants be of good character and have no criminal record. The US is burgeoning with immigrants, legal and illegal, with criminal records. Obama promised that all illegals with felony records be deported but over the past several years, his administration has released several hundred thousand illegals with felony records into your neighborhoods to continue their lives of preying on innocent American citizens.

Fourth, Mexico does not allow foreign visitors from getting involved in their internal government policies. If they do, they are either deported or jailed. Here in the US we allow illegals to march in protest and even usurp the rights of US citizens. American students have been disciplined for being patriotic because it offended illegals; I say that is totally unacceptable.

Fifth, Mexico does not tolerate illegal immigration. They consider it a felony offense punishable by immediate deportation or jail. If someone attempts to illegally re-enter Mexico a second time, they face up to 10 years in prison, and trust me, Mexican prisons are not a place anyone wants to be. Here in the US, we just keep arresting, deporting or releasing repeat offenders. We treat them like the parent in the store that keeps telling their kids to stop doing something but never follows through with any form of discipline.

Sixth, Mexico will arrest any foreigner caught working in Mexico without a government permit. They are sent to jail and the company that hires them can face significant fines. Here in the US, Obama just grants every illegal the right to take jobs away from hungry Americans.

All President Trump is doing is calling for the enforcement of federal immigration laws which is his sworn duty as President of the United States. Mexico is upset because they don’t want the return of their poor and criminals. What’s really sad is that the liberal Democrats and mainstream media are taking the side of a foreign government over our own nation and national security. Makes you question their loyalty and patriotism and question why any American would want them running anything in our country.