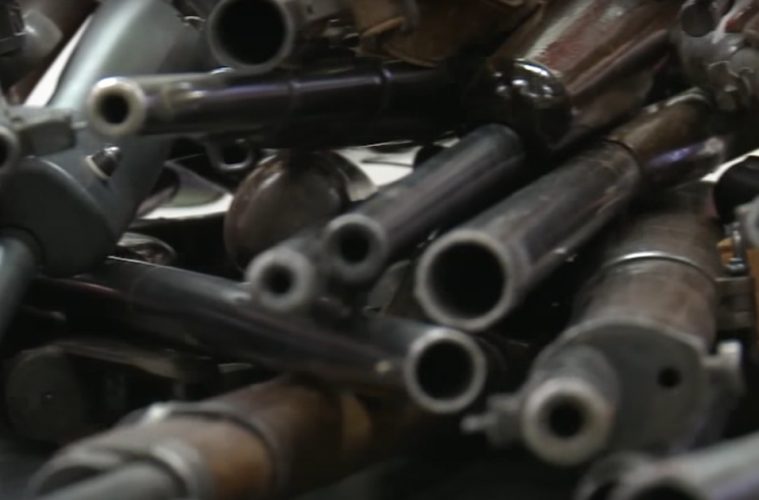 Gun Buy-Back NOT Solution to Increased Gun Violence in Cincinnati

How many times have we seen the media give lots of coverage to no questions asked gun buy-back programs. We see piles of handguns, rifles and shotguns ready to be crushed and melted down. However, when has the same media reported drastic reductions in gun violence in those areas with the gun buy-backs?

Like Chicago and a number of other Democrat run cities in the United States, Cincinnati appears to be experiencing an increase in gun violence, shootings and killings and authorities are looking in all the wrong directions for solutions.

“Two shootings in Over-the-Rhine on Sunday bring the growing total of shootings to 12 in the last seven days.”

That’s a lot of shootings in the Queen City but not nearly as much as seen in Chicago. Over the weekend of February 11-12, CBS Chicago reported:

“Six people were killed, including an 11-year-old girl, and at least 27 others were wounded in shootings across the city over the holiday weekend marking Abraham Lincoln’s birthday.”

This past weekend, CBS Chicago reported:

“Four people have been killed and at least 24 more wounded, including two 13-year-old boys, in Presidents Day weekend shootings across the city, according to Chicago Police.”

A group in Cincinnati is taking a different approach. Rather than push for stricter gun control ordinances, they held a gun buy-back on Monday.

From past gun buy-backs in a number of cities, there are several things that take place. Some citizens do think twice about having a gun in their house and decide to sell them at the buy-back. Gun buy-backs are also a favorite occasion for junkies and people with drug habits, as they see it as a quick and easy way to pick up some money to support their habits. The problem arises that some of the guns they sell at the buy-backs are stolen. Yes, people with drug habits and other criminals intentionally start breaking into cars and homes in search of guns that they can then sell with no questions asked.

But what about the criminals who use guns to commit crimes? Chances are, some will sell their guns at the buy-back. What better way to get rid of a murder weapon than to sell it at a no-questions gun buy-back? But then they go back and illegally buy or steal another gun to replace it. Most criminals do not go through legal and proper procedures to obtain their guns.

Gun buy-backs rarely result in a marked decrease in gun violence. They only serve to temporarily appease the bleeding heart anti-gun liberals and to provide quick easy cash for criminals and drug users, who often resort to committing more crimes to obtain the guns they sell back.

They do nothing to change the attitudes of the people who commit the gun violence. Until those attitudes are properly addressed, gun violence will continue to climb in Chicago, Cincinnati and elsewhere.