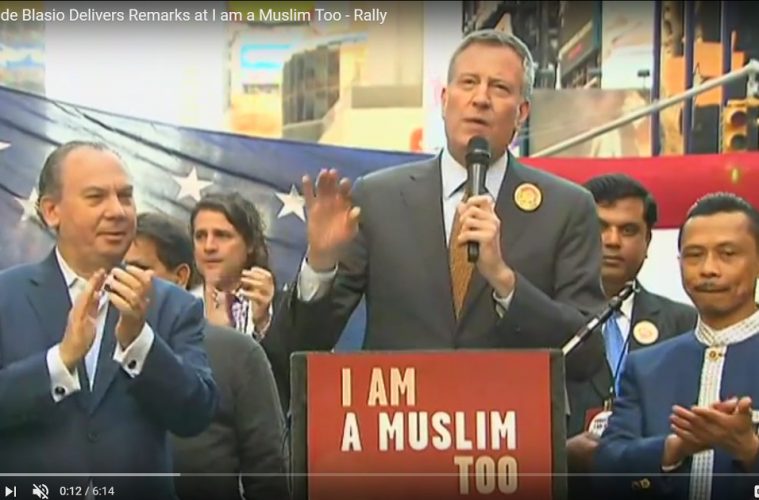 Liberals Protest in NY at ‘I Am A Muslim Too’ Rally

If liberals only knew the danger that Islam poses for America, the American people and the American way of life. They claim to come here to enjoy our way of life and then in so many locations, they work to impose their customs, religious beliefs and sharia law. Acting in their ignorance, thousands of liberals took to the streets in New York City to support Muslims in a protest against President Donald Trump. Even ultra-liberal Mayor Bill DeBlasio joined the rally.

The Muslim call to prayer rang out through Times Square in New York City on Sunday afternoon as a large, mixed-faith crowd of merchandise hawkers, social activists, organizers, curious tourists – and genuine protesters – declared their allegiance with Islam.

“I am a Muslim, too!” the group chanted several times at the anti-President Trump rally organized by hip hop mogul Russell Simmons and a local rabbi and imam.

“We are here, unified, because of Donald Trump, so we won’t speak too harshly of him tonight – today. We want to thank him for bringing us together,” Simmons said.

Simmons used to be friends with Trump, and the two men reportedly socialized nearly every weekend at Trump’s Mar-a-Lago estate in Florida. Trump even wrote the foreword for two of Simmons’ books, and Simmons has said he was with Trump during Trump’s first date with now-First Lady Melania Trump.