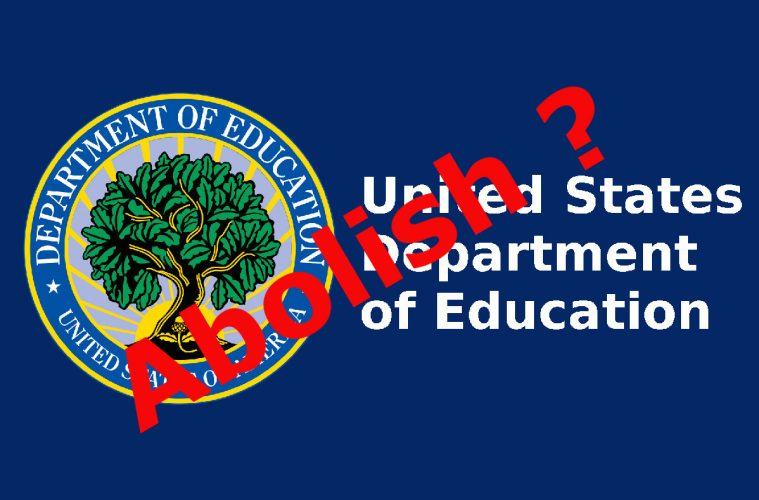 Should Department of Education be Abolished?

Do you know that the Department of Education was a product of socialist Democrats to accomplish two goals?

Goal 1 was to take more power away from the states and give it to the federal government. Socialists and progressives have always been against the Tenth Amendment which reads:

“The powers not delegated to the United States by the Constitution, nor prohibited by it to the States, are reserved to the States respectively, or to the people.”

In truth, the Constitution affords the federal government very limiting power, especially over the states. However, federalist, socialists and progressives have steadily passed measures in Congress to strip states of their rights and powers.

However, progressive socialists wanted more control and power over the states, so in 1979, with clueless Jimmy Carter in the White House and Democrats back in control of both the Senate and House, the Department of Education was created as a separate entity. The newly formed Department of Education was basically given complete control over the education of millions of kids that should have been the responsibility of each state.

The second purpose for the formation of the Department of Education by progressive socialists was to give them more control over the socialist brainwashing of generations of kids. Think about it. Who else could better brainwash an entire generation and change the face of the nation considering that they have control of your kids for 6-8 hours a day, 5 days a week, 9 months a year for 12 years? In far too many homes today, teachers spend more time with kids than their parents do and thus can exert a far greater influence over the kids than their parents have.

The effectiveness of their efforts are clearly evident by how many young adults and college students voted and reacted to the November election last year and to President Trump’s efforts to make America great again. Pay attention to their signs, slogans and chants and you’ll see them rife with socialist ideology.

“The Department of Education shall terminate on December 31, 2018.”

Massie posted his reason for introducing the bill on his Facebook page:

“Neither Congress nor the President, through his appointees, has the constitutional authority to dictate how and what our children must learn…”

“Unelected bureaucrats in Washington, D.C. should not be in charge of our children’s intellectual and moral development. States and local communities are best positioned to shape curricula that meet the needs of their students. Schools should be accountable. Parents have the right to choose the most appropriate educational opportunity for their children, including home school, public school, or private school.”

“For years, I have advocated returning education policy to where it belongs – the state and local level. D.C. bureaucrats cannot begin to understand the needs of schools and its students on an individual basis. It is time that we get the feds out of the classroom, and terminate the Department of Education.”

Now we will see if the Democrats hate newly sworn in Secretary of Education Betsy DeVos enough to side with Massie to abolish the Department of Education. Or are they so committed to their socialist indoctrination program that they’ll opt to protect DeVos and her agency.

Personally, I believe the states should have the power and authority over what their kids are taught in public schools, not the federal government. Why not distribute the $69.4 billion a year allocated for the Department of Education to the states to pay for their education departments? Imagine what your state could do with a billion dollars to help with the education of your kids.