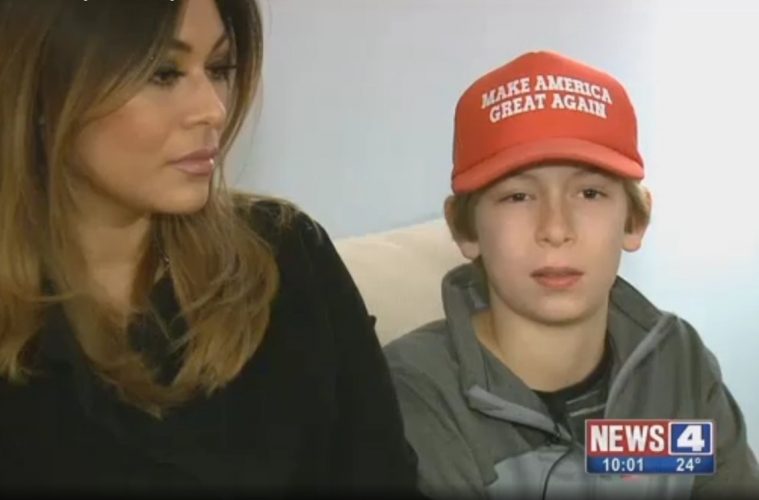 It’s been said many times that the most intolerant people are liberals who preach tolerance. Gay activists protest and file lawsuits to force others to accept the sinful lifestyles, but are completely intolerant of anyone who disagrees with their perverse views. Black activists protest, march and riot, demanding tolerance of their skin color, but yet they are ones out there calling for the killing of whites, police and anyone associated with Donald Trump. Political liberals are the same way. They claim to want equality and tolerance but when they encounter anyone who has opposite political views, they resort to sometimes violent means to silence their opposition.

Sadly, it’s not just warped and misguided adults who act this way, but a growing number of school teachers, administrators and kids are also becoming more politically violent and intolerant with conservatives.

In the 2012 presidential campaigns, 16-year-old Samantha Pawlucy went to school wearing a pink Romney-Ryan t-shirt. When she entered her geometry classroom, the teacher began to bully her in front of the class.

The teacher, an obvious Obama supporter, approached Samantha with a red marker and attempted to mark over the shirt telling her that she couldn’t wear that shirt in an Obama school. But Samantha would not let her do it. Then the teacher told her to take off her shirt and she would give her another shirt to wear. The whole time this was happening, the teacher kept berating Samantha about wearing a Romney shirt at an Obama school.

When Samantha refused to take off the t-shirt, the teacher ordered her out of the classroom and again Samantha stood her ground. By the time the teacher finished her tirade, some of Samantha’s classmates joined in as did the school janitor. She was so embarrassed and humiliated by the event that she refused to return to the school.

Similar incidents took place in 2012 and again in 2014, often with students joining in with the teacher as they bullied and tormented students who favored conservative candidates.

“Late last month, Muskegon, Michigan 10-year-old Dallas Johnson wore his MAGA hat to school on Inauguration Day, and was ridiculed and bullied by his classmates for it.”

“‘During recess some kids said stuff about (President Trump) and would take my cap off,’ Dallas said. ‘They were saying ‘Trump is gay, Trump is wacked, and take that hat off,’ One kid took it off and ran away with it,’ he said. “One of my friends told me, ‘You’re not wearing that hat to basketball practice.’”

“The hat, a present from his parents, was a point of pride when he went to school on Inauguration Day, but the bullying took a toll on the student.”

“‘When he got in the car, I said ‘What’s wrong buddy?’” his mother, Dee Johnson, told EAGnews. ‘He said people kept taking his hat. He was kind of choked up. He said the kids kept saying President Trump was gay, dumb and stupid. I asked if the class has watched the inauguration, and he said ‘no.’”

More recently, Gavin Cortina, a 12-year-old middle school student in Chesterfield, Missouri, a western suburb of St. Louis, was attacked on a school bus for wearing a Trump hat that read ‘Make America Great Again.’ According to videos taken by other students and bus surveillance, the altercation started when other students began verbally arguing with the boy, the son of Christina Cortina, about Trump’s wall along the Mexican border. The argument escalated to pushing and then punches. In one video, at least one other student can be heard verbally egging on the physical attack of the boy with the Trump hat. The school district investigated the incident and suspended all three of the boys, the one who started the physical fight, the one who egged it on and the victim wearing the Trump hat.

“As a parent it’s so upsetting. I feel like my son was made an example of, it was a tricky situation, it was politically charged.”

“I saw him being persecuted for having an opinion of his own. I saw him being berated, and bullied and beat, literally beat, because he felt strongly about the world today.”

“At one point he just got so frustrated he pushed me … and then he kept hitting me and backing me up to my window of the bus, so I just had to push him out.”

These accounts are typical for intolerant liberals, but to see such rampant behavior over political issues from students this young demonstrates that they are being taught to be intolerant by others, perhaps their parents, teachers or even the media. They see the media giving all the attention to other intolerants and they figure they’ll get the same kind of attention and make themselves look big and important.

In my school days, a student had the right to defend him or her self, but in today’s intolerant world of liberalism, conservatives have no rights and liberals have all the rights. It’s wrong of the school to punish Gavin for defending himself and sends a dangerous message to other kids that will end up making them easier targets for bullying liberals.