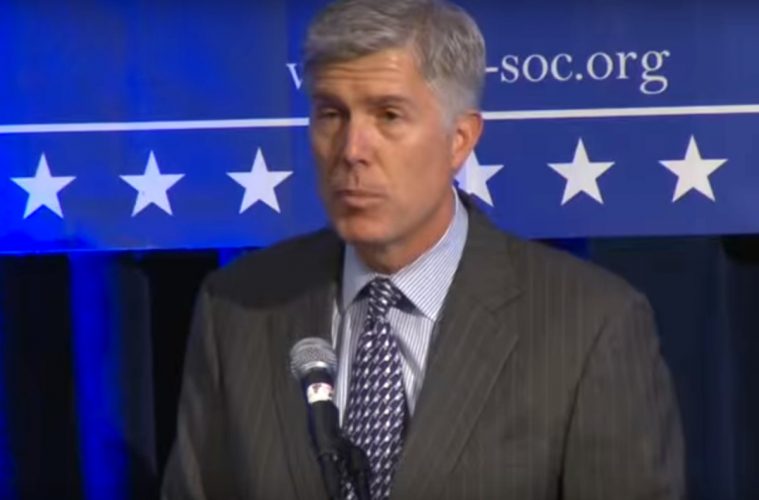 America lost a true hero when Supreme Court Associate Justice Antonin Scalia died last year. he valued the US Constitution, federal law and the historic foundation of America. Senate Republicans forced Barack Obama to withhold any nominations, promising they would not even consider confirming them. President Donald Trump has promised to name his nominee this next week and rumors have it that judge Neil Gorsuch is the front runner  to fill the vacant seat left behind by Scalia.

This week, Neil Gorsuch emerged as a front-runner to fill the vacancy left by the death of Supreme Court Justice Antonin Scalia. President Trump has indicated that he intends to nominate someone “very much in the mold of” Justice Scalia, and Neil Gorsuch is about as close as it gets.

A judge on the Denver-based Tenth Circuit, Gorsuch is known for his colorful writing style and textualist opinions. His background features sterling academic credentials (with degrees from Columbia, Harvard, and Oxford), clerkships with D.C. Circuit Judge David Sentelle and Supreme Court Justices Byron White and Anthony Kennedy, and service in the U.S. Department of Justice.

Though born in Colorado, Gorsuch spent many years in Washington when his mother, Anne Gorsuch Burford, served as EPA administrator under President Reagan. Thus, he’s more of an “inside the Beltway” candidate than many others on Trump’s list of 21 potential nominees.

Like Scalia, Gorsuch is an ardent supporter of religious liberty, as demonstrated by cases such as the ObamaCare contraception mandate challenges brought by Hobby Lobby and the Little Sisters of the Poor and others involving religious monuments on public lands and prisoners’ free exercise rights.