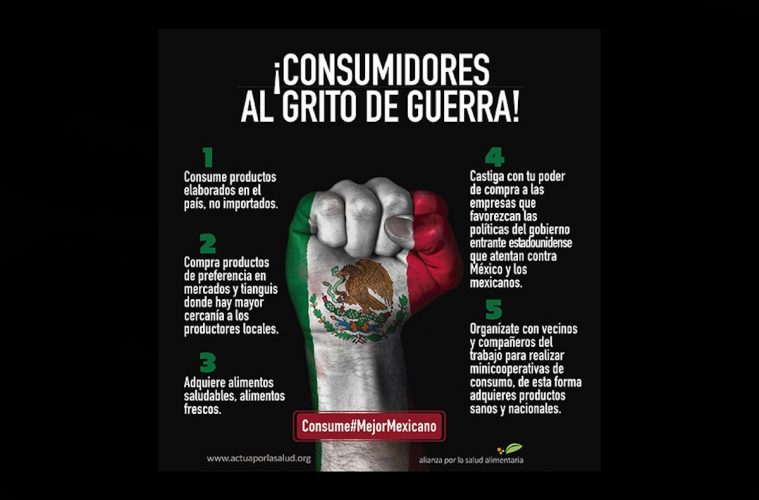 Mexicans Boycotting US Companies over Trump

Why is it wrong for US citizens to protest and complain about illegal aliens from Mexico flooding into our country while it’s okay for Mexican citizens to protest against America? The liberal media and politicians have sided with the Mexican people instead of the American people over illegal immigration and President Trump’s plans to build the Wall and stop illegal immigration.

The digital image shows a clenched fist bathed in the red, white and green of Mexico’s flag and decorated with the nation’s emblematic eagle. “Consumers, to the Shout of War,” it says in Spanish above the fist. “Consume products made in country…Use your buying power to punish the companies that favor the politics of the new U.S. government.”

Created by a Mexican food-activist group, the image is part of a slew of messages, memes and videos that have been spreading in Mexico in recent days as President Donald Trump pushes for a border wall, deportations and punishing new trade rules. Others messages call for specific boycotts of U.S. companies in Mexico, including McDonalds, Walmart and Coca-Cola. One of the most heavily trending hashtags is #AdiosStarbucks, or “Goodbye Starbucks,” referring to the Seattle company which has opened hundreds of coffee houses here.