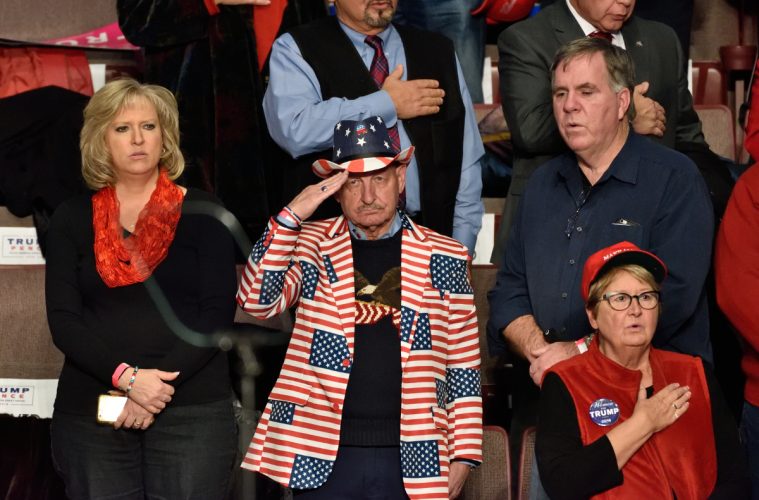 From the first day Donald Trump took a podium to speak during his presidential campaign, liberals instantly began labeling him as a hater and a racist.

Trump spoke out saying that he was concerned for America and the American people. He was concerned about the nation’s lack of security along the southern border with Mexico, so he vowed to secure the border and stop illegal immigration.

Instantly, liberals and many Hispanics began labeling Trump as a hater of all Hispanics and a racist against Hispanics. Thousands of liberals have been protesting the election of Trump, carrying signs that call him a hater and racist. Their signs are dishonest. If the signs were honest, they should call ‘Trump – Loyal Patriotic American’.

Yet, Trump never ever said anything that indicated he was a hater of Hispanics. He said he wanted to stop illegal immigration and to enforce the federal immigration laws and deport millions of illegal aliens. These illegals should have been deported during previous presidential administrations, Democrat and Republican, but they weren’t. Just because other presidents failed to uphold the laws of the nation, is no reason that Trump cannot uphold those laws. His actions indicate that he wants to be a law-abiding President who actually cares about the nation and the American people.

It’s the same way with the LGBT community. Everyone who disagrees with their sinful and disgusting lifestyle is labeled a hater and homophobe. They are among the most intolerant group of people in the world.

During Barack Obama’s eight years in office, many liberals labeled everyone who criticized Obama as being a racist. It’s also proof of the hypocrisy of the liberal left. Obama stated many times during his 2008 presidential campaign that his running for the White House had absolutely nothing to do with race, when the rest of America knew otherwise. It was all about race and clearly demonstrates the hollowness of the argument of racism. Obama looks like a black person, but it seems none of the liberals recognize the fact that he is equally white. His mother was white and his father was black. That makes Obama equally white and black, but if you talk to any liberal, it’s all about his being black and nothing to do with him being equally white.

Yet, so many times, we saw liberal Democrats, black activists and members of the liberal media labeling anyone who criticized Obama’s anti-American policies as being a racist. Obama worked to destroy America in many ways, but no one accused him as being unpatriotic. However, anyone who wasn’t supportive of Obama’s anti-American policies was labeled a hater, racist and even a bigot.

President Donald Trump is NOT a racist and he is NOT a hater. He’s a loyal patriotic American who wants to secure, protect, help and build America and the American people. I am also a loyal patriotic American and the only thing I really hate are liberals calling me a hater and a racist because I strongly disagree with Obama, Clinton and liberal Democratic anti-American policies.