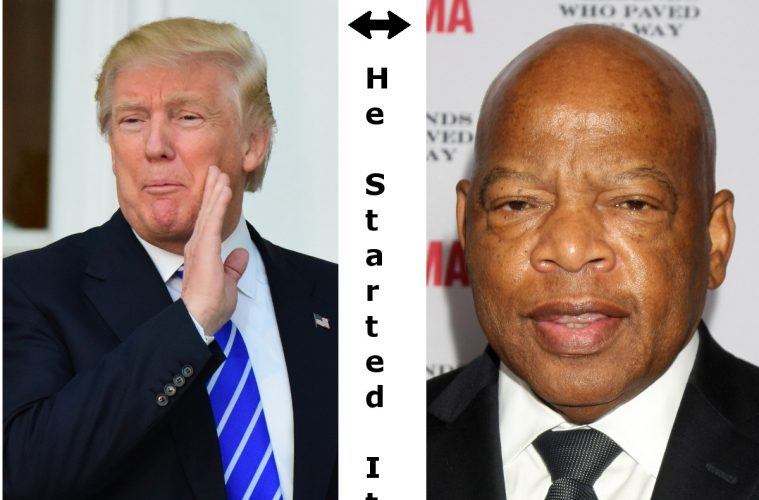 I have had several readers who took offense with my stand on Obama, but no one ever accused others of starting the arguments or discussions and I accepted full responsibility for my statements and my stand.

However, liberal Democrats today rarely accept the blame for anything they do or say. Such is the case of the ongoing bruhaha between Rep. John Lewis (D-GA) and President-elect Donald Trump.

Lewis began the whole verbal tirade when he stated in an interview that he does not consider Donald Trump as a legitimate president so he will not be attending the inauguration later this week.

Lewis has a long history of being a civil rights advocate as he marched with Martin Luther King Jr., and still bears some of the physical scars from a beating he took on one of those marches. Lewis is well known for his stand on civil rights which often can be equated to black American rights.

Lewis is fully entitled to his opinion about Trump, but he needs to grow up and realize that regardless if he likes it or not, Trump won the electoral vote and will be sworn in as the 45th President.

However, I don’t condone Trump’s response which was unnecessary. Trump tweeted that Lewis needs to spend more time fixing his district in Georgia which is a crime ridden district. Lewis’s district covers the Atlanta metropolitan area.

As for the issue of crime, in 2015, Atlanta was ranked number 14 in a list of cities with violent crimes based upon figures released by the FBI.

According to The Atlanta Journal Constitution:

“But the rise in homicides in Atlanta mirrors a national trend in major cities across the country, and a New York Times analysis last year showed major jumps in murder rates in 25 of America’s 100 biggest cities. Atlanta was not one of the 25.”

“The most recent violent crime rate for Atlanta and more than two dozen of its largest surrounding counties, according to the FBI, was 401 per 100,000 residents. That puts Atlanta at a rate similar to that of Clarksville, Tenn, which came in at 405. That’s higher than the rate of the Dallas-Fort Worth area (338) but lower than Kansas City (536), Columbia, S.C. (651) and Columbus, Ga. (469).”

Atlanta’s crime rate seems to be improving but the issue is Trump’s response to Lewis and what’s happened since then. Trump went on to tweet that Lewis is all talk, talk, talk and needs to be more work, work, work. Yes, I agree that was going too far, considering Lewis’s history, but Trump is not the one who started this whole thing. It was Lewis. Lewis went public with his statements about Trump to begin with, but because Lewis is a black American activist, many believe he can do no wrong and that all of the fault rests squarely on Trump. Even the liberal media is blaming Trump for the whole mess.

I blame both men. Lewis was the instigator. Trump should have used some discretion and just let Lewis have his little demonstration of not attending the inauguration and be done with it. Even though Republicans have control of the Senate and House, it doesn’t mean that Trump can walk all over Democrats. He will accomplish so much more if he tried to reach out and work with them rather than continue the bi-partisan fighting that’s been business as usual for years.

Even though both men are to blame, the liberal media and liberal politicians are quick to lay all of the blame on Trump alone and portray Lewis as some sort of sinless saint, which he is not.