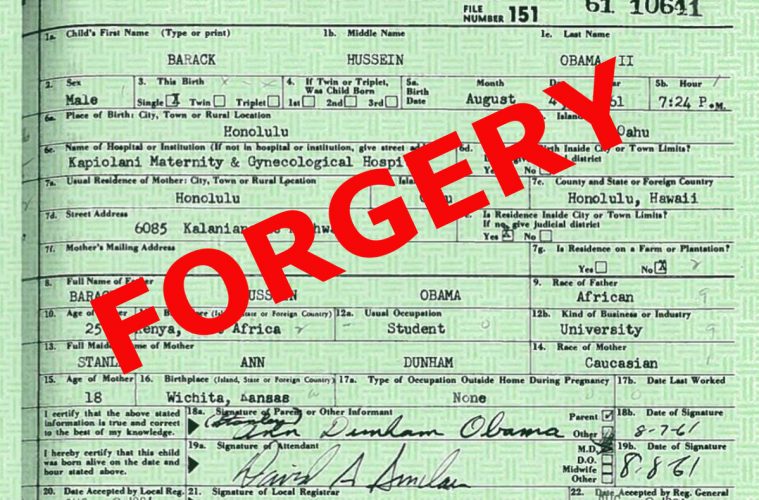 Last week, I reported that an official investigation into the long form birth certificate for Barack Obama that was presented to the American people by the White House is a forgery.

While many questioned the legality of Obama’s birth certificate and his eligibility to run and serve as President of the United States, only one official investigation was launched. After nearly 250 residents petitioned Maricopa County Sheriff Joe Arpaio to investigate Obama’s birth certificate, the Cold Case Posse began an investigation, led by Mike Zullo. At the beginning, Arpaio and Zullo stated that they were obligated to investigate because of the petition of the citizens, but that their aim in the investigation was to clear Obama of any wrong doing and prove that he was indeed eligible to run and serve as president.

However, at almost every stage of the investigation, Zullo and his Cold Case Posse team ran into roadblocks that seemed to have been put in place to prevent anyone from learning the truth.

One of the things they learned is that at the time of Obama’s birth, Hawaii had the policy of selling birth certificates to foreign nationals who visited the islands. During the time of Obama’s birth in 1961, many Japanese nationals applied for ‘unattended’ birth certificates for their own foreign children. They did this so as to make their children US citizens and entitled them to the privileges of citizenship. At the time of Hawaii’s statehood in 1959, Japan was still trying to rebuild itself from the financial and industrial devastation of World War II. As a new state, Hawaii needed revenue and one way they found to generate some revenue was to offer unattended birth certificates for a price.