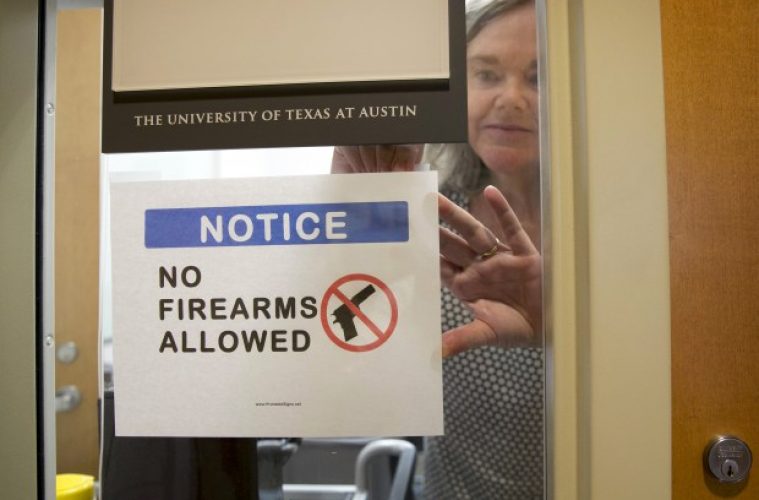 “You want boys in the girls’ bathroom? We can top that. We’ll give you loaded guns in your classroom.”

Professors at the University of Texas must now allow students to carry firearms into the classroom, or they will face discipline. While many of the teachers feel this is a dangerous new law, it is clearly a HUGE step for gun advocates and campus-carry rights.

The pointy-headed professors may once have had their run of the expansive Austin campus. But Republicans in the Legislature showed them who’s boss: “You want boys in the girls’ bathroom? We can top that. We’ll give you loaded guns in your classroom.”

Of course, the liberal professors are fighting back, but to no avail are they getting far. One professor, Jennifer Glass, stated that she, “has specific concerns about her safety, and the safety of her students.” A few others were speaking out too:

Professor Mia Carter pointed out, some university students have “mental health issues.” They are psychologically unstable and stressed out, and inviting them to carry a concealed weapon is probably not a great idea. “She has been threatened,” the complaint states, “and so have other students.”

Well, Professor Carter, students with mental health issues cannot legally carry. I am sure that along with these new regulations, there will be some type of check-up to assure that not just anyone is waltzing onto campus with a loaded pistol.

However, in the event that one of these nut jobs DOES get ahold of a firearm, and brings it to campus, then do you want to face them alone? OR would you rather have a licensed gun owner in the room to protect you? I assure you, the first option is typically not a forgiving scenario.

The gun movement and its attendant politicians are in charge here, and if the pointy heads don’t want to submit to gun culture in their workplace, they’ll have to leave either their profession or the state. Meanwhile, state professors will probably want to ratchet down debate in class and institute a strict regime of political correctness, Texas-style. Gun culture has a low tolerance for hurt feelings.

Let’s hope the rest of the country can take lessons from Texas. C’mon America, allow students to be educated and protected at the same time.