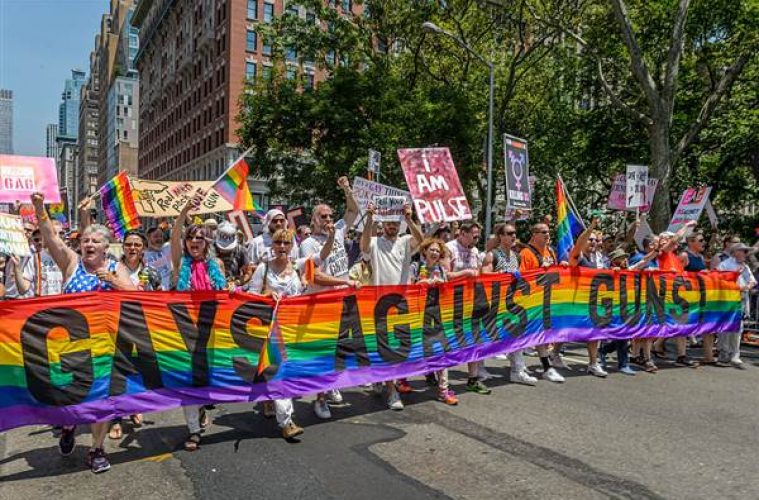 Is the LGBT Community Targeting Gun Rights Next?

First they came for the church. They came full force and pushed their agenda until the courts decided that their idea of marriage would be legal. Then they raised hell until the churches were forced to marry them. Now, they could be coming for the gun rights that Americans legally possess, due to the 2nd amendment.
A new movement has been started in New York, called “Gays Against Guns.”

For many of the organizers behind recent demonstrations, the shooting at the Orlando nightclub Pulse catalyzed their interest in gun control and their determination to make change. Kevin Herzog started the group Gays against Guns (GAG) in New York City in the wake of the Orlando massacre, and since then, chapters have sprung up in across the country.

While our hearts stood with Orlando and the tragic shooting, we cannot stand with them when they come against our God, and country, given right to protect ourselves. If anything, you would think that this would raise more awareness in the LGBT community. It should encourage them to get a license to carry and protect themselves. Instead they created a group to protest the one thing that could save them if they are caught in the sights of someone looking to do harm.

It is also significant that 2016 is an election year. Abe Gurko, founder of the LA chapter of Gays Against Guns, called this an advantage and sees an opportunity to exert pressure locally.

“The election in November is not only about the president,” he said, stressing the need to look down ballot nationally as well. “What we’re up against is people in the House and the Senate who refuse to vote on sensible gun laws.”

What they’re against is not big bad men in the House and Senate who are refusing to compassionate. They are refusing to be spineless, because we have a much bigger problem on hand. We have an issue with terrorism. Guns did not attack the Pulse club in Orlando. A terrorist did. They are targeting the wrong things, like sheep being led to the slaughter. It should be “Gays against Terrorism” not “Gays against Guns.”

Activists insist that the primary obstacle to achieving gun reform is not the Second Amendment — but the role of money in American politics.

“No one is saying we want to take all the guns, what we are saying is that there should be sensible, logical regulation around firearms and what guns we allow civilians to have,” explained Preston. The real issue, she added, is the “shiny price tag dangling from our elected officials’ neck.”

The issue with that logic, is that giving up a little bit of your rights means that eventually, you’ll have to give it all up. They don’t see that the liberals are only using the “Gays Against Guns” movement to push their agenda. At this point in time, these LGBT activists are simply pawns on the table of a much bigger board.

In the words of our forefather, Benjamin Franklin, “Those who would give up essential liberty, to purchase a little temporary Safety, deserve neither liberty nor Safety.”