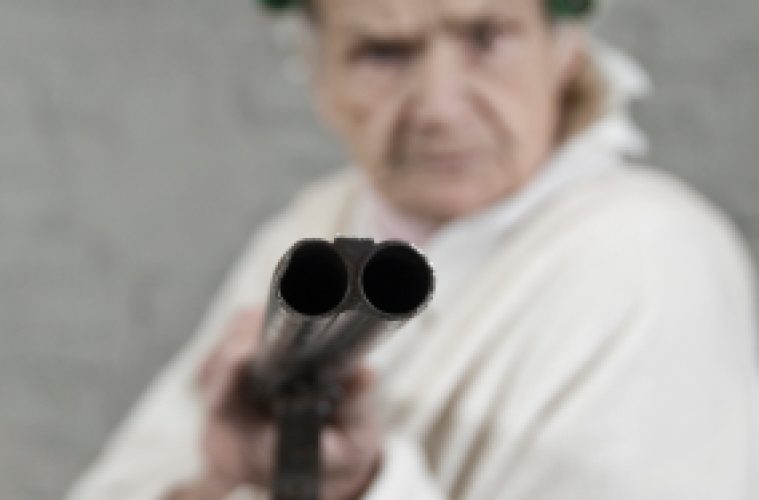 In the wee hours of the morning on July 17, two intruders found more than they bargained for when they broke into the house of a 77-year old woman. The two burglars invaded the home of a Missouri woman with ill-intent. However, instead of the riches they were seeking, they only found themselves staring down the barrel of a shotgun.

Police say that the elderly woman heard a noise in her spare bedroom and decided to investigate it herself, but not before grabbing her shotgun.

“She grabs the shotgun and goes back to where she hears a noise and finds two individuals inside one of her spare bedrooms,” explained Detective Sergeant James Kauzler with Jefferson County Sheriff’s Department. When the suspects saw the gun, they jumped out of the bathroom window they used to get into the house, police say.

The Missouri woman has not let this incident cause her to be afraid, but rather used it to raise more awareness. She is not the only senior living in the neighborhood, and most definitely not the only one that owns guns. Her 87-year old neighbor, Doris Jackson, stated, “How about a nine millimeter? I wouldn’t have a shotgun but I have some more besides that. I’ve got some guns you know.”

While the sheriff’s department is urging citizens to immediately call 911 if they hear an intruder, they are also acknowledging the fact that people also have the right to protect themselves. Which in most cases, is the fastest and safest thing to do. We do not always have time to wait for help to arrive. Sometimes, it is a matter of life or death.

There have not been any arrests made yet, but the intruders did leave behind some evidence. Some tools, along with a cellphone belonging to a 28-year old man, were left when they fled the scene. The man has been named a person of interest.

This just goes to show, that you are never too old to exercise your 2nd amendment. Keep your guns close, folks.