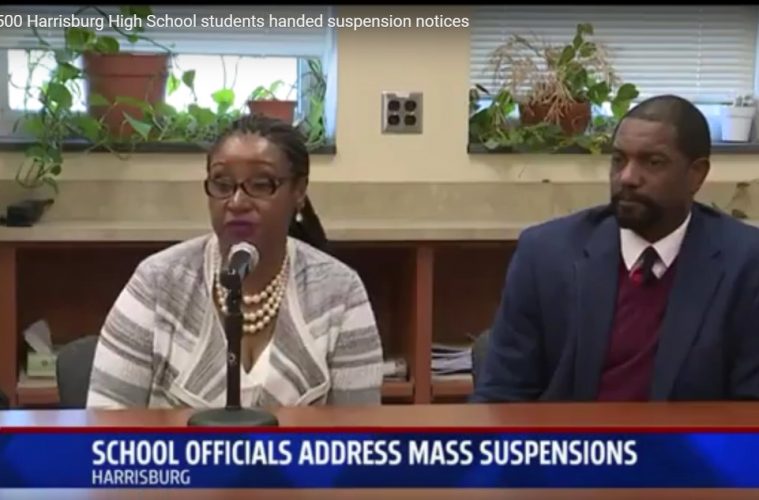 We regularly bring you reports of public schools suspending a student for truly ridiculous reasons. Many of them have involved young students from preschool to around second grade.

Remember the recent report of Hunter Jackson, a 4-year-old preschooler who was suspended from his preschool for just being a 4-year-old boy. He committed the horrible crime of taking the spent brass .22 caliber shell he found to school to show his friends.

Let’s not forget the 9-year-old girl who was suspended for shaving her head to support her best friend who was undergoing chemotherapy for cancer and had lost all of her hair. Her friend was being teased by other kids and evidently the teachers weren’t doing much to stop it, so young Kamryn decided to show her friend how much she cared and shaved her own head, but it turned out it was against school policy. She was told not to return to school until her hair grew back out or if she had a wig to wear.

Then there was the second grader who ate off parts of his toaster pastry to make it look like a mountain. I have to admit that sometimes I do things like this with a piece of bread. In this case, a teacher didn’t see a mountain, she saw a gun. Yep, this second grader had become a would-be terrorist by chewing his pastry to look like a gun, according to the teacher. I suspect if the boy pointed to a cloud and said it looked like a mountain or house, the teacher would look at the same cloud and scream it was a gun. Anyway, the boy was suspended for two days.

Young kids are filled with imaginations. It’s easy for them to make believe and act out imaginary scenarios. Kids have been playing like this for centuries. When we were young, we played cowboys & Indians, cops and robbers, played house, imitated animals and many other wild fantasies. How many of you remember playing like you were flying when you were young?

That’s why the case of two 7-year-old boys who were suspended from school for pretending their pencils were their guns is so ridiculous. There was also the case of the 5-year-old girl who was playing with a friend at school and mentioned that when they got home, she would shoot her with her Hello Kitty Bubble Shooter – a toy that shoots out soap bubbles. You guessed, it, the girl was suspended for threatening another student.

Zero tolerance policies have gone way too far as in the case of Bruce Henkelman, a sixth-grade boy who was talking with his friends on the school bus going home. There had recently been a school shooting and the boy told his friends that he wished he had a gun so that he could protect his friends from any shooter. The bus driver over heard him, reported it to school officials and you guessed it, the boy was suspended, just for saying he wanted to protect his friends. The school principal determined that the boy’s use of the word ‘gun’ was so heinous that he suspended Bruce for 10 days.

One thing that all these accounts have in common is the lack of common sense of educators. However, it seems that all common sense has not totally escaped the realms of education officials.

As far back as I can remember, ditching school or a particular class was always a temptation to many students. In our day, you could get in serious trouble for ditching, but many schools today seem to warn, yell and then do little to enforce it. Some students ditch so often, that when they do graduate from high school, they can’t read, write or do simple math and end up being failures in life.

That’s why over 500 students at Harrisburg High School in Pennsylvania were shocked to receive notices that they were being suspended from school due to excessive absences. Principal Lisa Love explained:

“Many parents send their child to school and think they’re going to class. I need to reach out because of the enormous number of students not going to class.”

“If you’re not in class, all you’re here to do then is to wreak havoc upon the school and disrupt the work that we are trying to do here, and that’s to focus on student achievement.”

“We don’t like to suspend. I don’t even like talking about suspensions, but because we’re in a place where our school is a priority school, we need to send the message that we value education first.”

Over 100 students were given a 1 day suspension while other cases are still being discussed between parents and school officials. In some cases, parents have provided documentation to justify some of the absences.