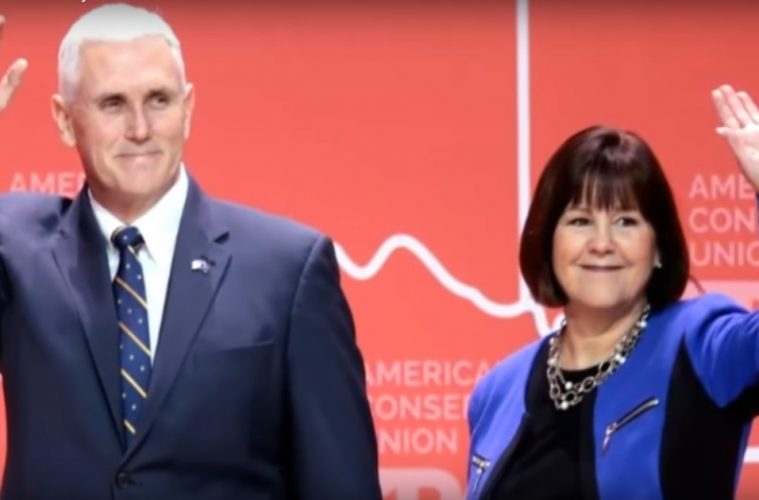 Have you ever noticed that liberals cannot stand to see a Christian actually live by their faith and Christian values? They expect them to be as weak and corrupt as they themselves are and when they aren’t, instead of changing themselves for the better, they do what they can to ridicule, degrade and destroy the Christian.

This is what is happening to Vice President Mike Pence these days. He is a Christian and lives by many strong Christian values, especially when it comes to his marriage to Karen.

In an interview, back in 2002, Pence told a reporter that:

“[He] never eats alone with a woman other than his wife and that he won’t attend events featuring alcohol without her by his side.”

“If there’s alcohol being served and people are being loose, I want to have the best-looking brunette in the room standing next to me.”

“It’s about building a zone around your marriage … I don’t think it’s a predatory town, but I think you can inadvertently send the wrong message by being in [certain] situations.”

After the Washington Post did a profile on Karen Pence (I cannot access the Washington Post because I refuse to pay their $99 subscription fee), Pence’s 15-year-old statement on not dining, traveling or being where they serve alcohol has been revived and used to mock and ridicule the Vice President.

Most liberals ignored the report of just how close the Pence marriage and relationship is. It was revealed that they have matching email addresses, their treadmills are side-by-side and that the Vice President has a red phone on his desk that connects to Karen. She has been reported to not only be Mike’s best friend but his strongest and most valuable prayer warrior.

All of these good traits are being overlooked as liberals are using his 15-year-old statements to try to indicate that the Vice President is either a morally weak person subject to temptation or that he is a sexist and considers all women to be sexual predators. Trust me, that is far from the truth.

A good friend of ours who attends our church has been long-time family friend with the Pence family and knows Mike and Karen. He told us that they both have strong Christian values and that they really do live by them and that both of them guard their marriage very vigorously. So, what’s wrong with that?

Far too many well-meaning pastors, counselors, co-workers, etc., never intend to cheat on their wives or have an affair, but end up doing so because they failed to put checks or safeguards in place. I know several Christian pastors who refuse to meet with or counsel any female, regardless of how young or old, married or single they are, without their wife present. They do it to protect their marriage or from being charged with any wrong doing.

We worked for a Christian ministry for a number of years and no matter who we were with, we were not allowed to even drive to a fast-food place for lunch alone with a member of the opposite sex. It was a matter of propriety and protection from temptation.

Any Christian, including Mike and Karen Pence will tell you that EVERYONE is a sinner and susceptible to temptation, even if they never intend to sin.

Have you ever heard about the frog and the pot of water? I’ve seen it happen for real and it’s just like sin and temptation. Place a live frog in a pot of hot water and it’ll jump right out. Place most Christians in a bad situation and they jump right out. However, if you place the frog in a pot of water at room temperature, the frog will stay in the pot. Then if you heat up the pot, the frog will remain in the water until the heat kills the frog. It was comfortable at the beginning and adjusted itself to accepting the hotter conditions until it was too late. Sin and temptation are often like that. At first it may start as a harmless look, statement, flirt or so on. Over time, the statements, looks, or flirting take on a more serious tone, but they are used to it and comfortable, until something happens and it’s too late and their lives and marriages are destroyed.

After the issue of VP Pence not wanting to be alone with any woman other than his wife took to social media, one person tweeted:

“If you laugh at Pence for respecting his marriage, it’s probably because you’ve never been in a healthy one.”

We applaud Vice President Mike Pence for taking this stand to protect his marriage and for living up to his Christian values. If America had more leaders like him, perhaps our nation would not be in the terrible mess we’re in right now.

We invite everyone to pray daily for Mike and Karen Pence and that God will continue to protect their marriage and their faith. Amen.