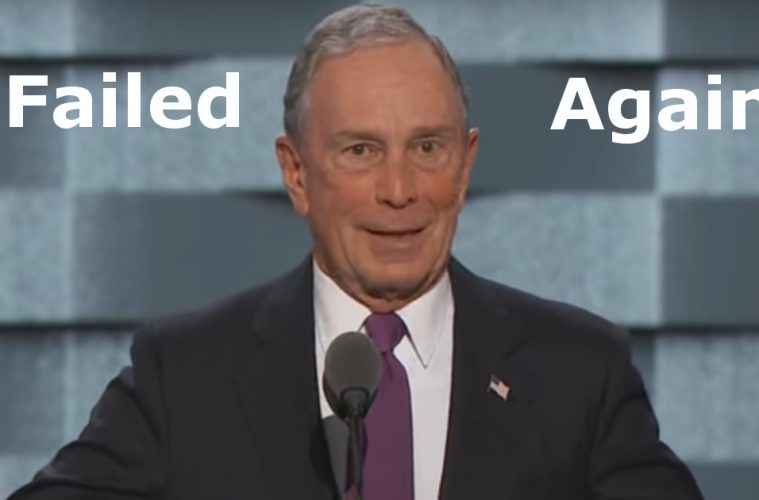 If you think big money is reserved for Republicans, think again. Michael Bloomberg, former Mayor of New York City, is listed as the sixth wealthiest person in America and 8th wealthiest in the world with an estimated value of around $46.5 billion. His political allegiance has swayed like a kite in changing winds. He was a Democrat, but switched to Republican when he ran for mayor. Since that time, he lists himself as being an Independent, although the majority of his political views firmly casts him as a staunch Democrat who supported Barack Obama, Hillary Clinton and many of their socialist views.

Since leaving the mayor’s office, Bloomberg has been spending millions of his own dollars trying to push anti-2nd Amendment legislation through as many state legislatures as possible. He knows a national anti-gun bill will never pass, so he is meticulously working in a number of states to push his personal socialist gun-hating views on as many America citizens as possible. Personally, I believe it should be illegal for the resident of one state to push his political agenda on residents of other states.

In last year’s election, Bloomberg used his wealth to push strict gun control measures in Maine and Nevada. In Nevada alone, Bloomberg spend $20 million pushing a ballot measure that would require background checks for all private transfers of any firearm. If a grandfather wanted to give his grandson one of his hunting rifles or shotguns, both the grandfather and grandson would have to undergo a background check, if Bloomberg had his way.

His push in Nevada won by the narrow margin of 0.8%, but due to an error in how the initiative was written, the measure will not be allowed to go into effect. The scary part is that you can count on Bloomberg to work to have another initiative written correctly and for it to appear on a ballot in the near future. He won’t give up until he either rips all of our 2nd Amendment rights away from us or until he runs out of money.

In Maine, he pushed a similar measure but it was defeated by 4% of the vote. This losing effort only cost him a piddly $8 million. However, Bloomberg’s $28 million combined expenditure is only a tiny fraction of his total wealth.

Just imagine some friend decides to go out to do some target practice or shoot some game birds or rabbits. One of the friends doesn’t have the right type of gun, so one of the guys offers to lend him a gun to use just for that outing. According to Bloomberg’s bill, both men would have to submit to a full background check beforehand.

Fortunately, Bloomberg’s effort in New Mexico, known as House Bill 548, was killed in committee when one lone Democrat sided with the 6 Republicans on the committee to vote 7-6 to kill the bill before it ever reached the floor of the House for a vote.

I don’t know how many millions of dollars Bloomberg spent to push this anti-2nd Amendment bill in New Mexico, but records do show that he contributed nearly $220,000 towards the campaigns of anti-gun politicians and action committees Land of Enchantment State.

On the flip side, Bloomberg was successful in pushing several anti-gun pieces of legislation into law in Colorado several years ago. That resulted in several firearm and firearm related manufacturing companies to move out of the state along with the cancellation of several hunting and outdoor television programs. It also resulted in two key state Democrats losing their bids for re-election.

It doesn’t seem like Bloomberg will run out of money anytime soon and that he’ll continue to spend millions of his own dollars to rip away the 2nd Amendment rights of as many Americans as possible. Therefore, it’s up to loyal Americans who respect our constitutional rights to continue to fight Bloomberg any way we can.