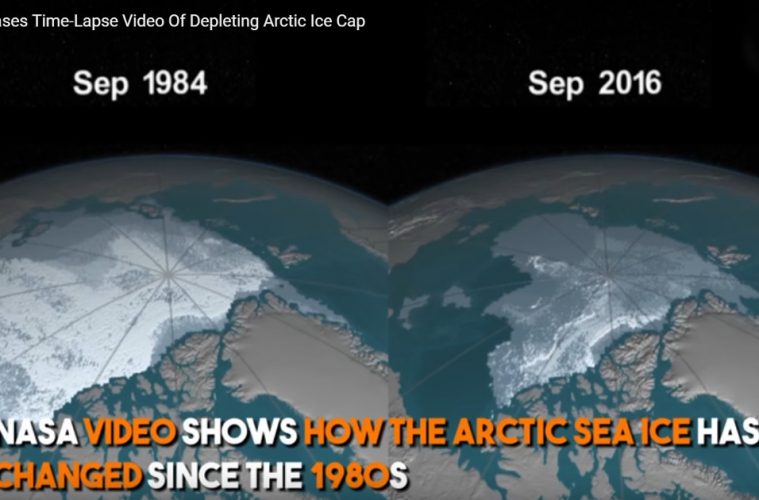 Arctic Ice Melt Half Due to Natural Causes

Climate change fanatics have been hollering and screaming for years about man-made global warming effecting the entire planet. The polar ice caps and glaciers are melting and it’s all man’s fault.

Ask yourself, what happened to the huge ice sheets and massive glaciers that used to cover Canada and the northern parts of America along with parts of Europe and Asia? Didn’t these massive ice sheets and glaciers begin disappearing long before mankind became industrialized? Who or what was to blame for that global warming that raised sea-levels more than they could possibly raise today? What was causing the greenhouse gases that contributed to the disappearance of ice sheets and glaciers?

Did you know that the sun also has a direct effect on the earth’s climate and temperature? According to Dr. Jason Lisle:

“We must understand that the most important natural factor in determining the earth’s temperature is the sun. We take for granted that the sun is stable and warms the earth in a uniform way.”

“For the most part, it does; it is an unusually stable star. But the sun does have natural cycles and minor changes in intensity that affect climate on the earth. One such cycle is the relatively short-term sunspot cycle. However, much longer variations may also exist. There is evidence that such variations have a substantial effect on earth’s climate…”

“In addition to the 22-year cycle, sunspots also undergo variations on a much larger timescale. These correlate very well with temperatures on earth. For example, sunspot activity was very low during the period roughly spanning 1645–1715. This period of reduced sunspot activity is called the Maunder Minimum. It corresponds well with the period of colder temperatures experienced in Europe, known as the ‘Little Ice Age’.”

“A similar though less severe period of low sunspot activity, known as the Dalton Minimum, occurred during the period 1790–1830. It also coincided with reduced temperatures. Conversely, the Medieval Warm Period (AD ~1000) seems to correspond with a period of high sunspot activity. In addition, sunspot activity has been on the decline in the last decade, and we have been experiencing global cooling since 2002.”

A recently released study that is drawing the ire of climate change fanatics claims that at least half of the melting of the Arctic ice is due to natural causes:

“But when Ding averaged the climate models together, the air circulation changes cancelled each other out—like a balanced equation. They only data that remained in the models was responding to external forcings, like greenhouse gas emissions. In other words, Ding found that between 30-50 percent of the arctic melting is due to these unforced, or non-climate change caused variations—and that with this factored in, the climate models were generally accurate. The increased rapidity of Arctic melting was due to natural variations outside of the scope of the climate change models.”

Perhaps some of the climate change and polar ice melting is due to man’s influence on the environment, but we need to keep in mind that a significant part of it is also due to natural causes. Many of these natural causes are cyclic and have been effecting earth’s climate for centuries and yet we are all still here. All the hysteria and hype over climate is not nearly as severe or critical as many liberal fanatics would have you believe.