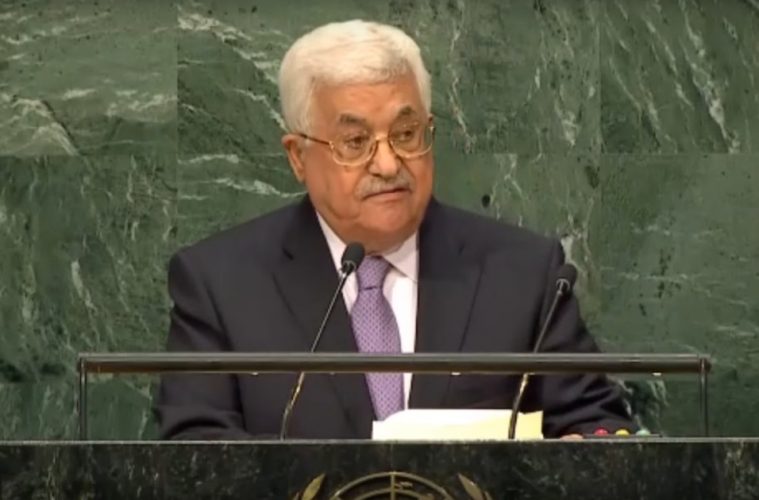 Not that long ago, President Donald Trump stated that he favored a one-state policy when it came to Israel and Palestine. He said that he believed that Israel had every right to their land.

Then for reasons not fully known, Trump reversed his position and has now openly supported a two-state policy of Israel and Palestine. His reversal was not accepted well with Israeli Prime Minister Benjamin Netanyahu. He reminded everyone that the Palestinian leaders have long vowed to destroy Israel and wipe them off the face of the planet.

Many conservatives criticized Barack Obama for his support of a Palestinian state and rightly so. One of the strongest political forces among the Palestinian people is Hamas, an internationally recognized Islamic terrorist organization who has also vowed to conquer and destroy Israel. Malik Obama, Barack’s half-brother has been seen in public wearing a Hamas scarf that bore the Palestinian inscriptions:

The scarf also contained a map of Palestine with the inscription:

This is a common Palestinian statement meaning that there is no Israel and Malik has worn it at more than one public event so it isn’t just a one-time fluke. Walid Shoebat says there can be no doubt that Malik Obama has definitely sided with Hamas and shares their vow to wipe Israel off the face of the earth.

In 2012, in response to the Palestinians’ efforts to gain United Nations membership over the past year, Rep Ileana Ros-Lehtinen (R-FL) used her position to place a hold on nearly $200 million that Congress had approved for them. After enough UN members voted against the Palestinians, Congress freed up $45 million and then another $88 million this past March.

However, in freeing up the funds to the Palestinians, Congress placed restrictions that the funds were not to be used for a number of specific projects such as any Gaza aid or for any road construction. The restrictions literally meant that a large portion of the money was untouchable under the current Palestinian plans. Then Barack Obama took it upon himself to remove any restrictions, thus freeing up a total of $147 million for the Palestinians.

Knowing the background behind the Palestinians and Hamas, it was surprising to hear that Trump had extended an invitation to Mahmoud Abbas, Palestinian President to visit the White House. A spokesman for Abbas stated:

“President Trump has extended an official invitation to President Abbas to visit the White House soon to discuss ways to resume the political process, stressing his commitment to a peace process that will lead to a real peace between the Palestinians and the Israelis.”

First, Israel has been the greatest US ally in the Middle East for decades so why would Trump do anything that would go against that alliance? Obama spent eight years trying to destroy the allegiance between the US and Israel, but Trump has vowed to rebuild the allegiance to what it used to be.

Second, if you truly listen to what most Palestinians say and believe, the only peace that will ever appease them is the total annihilation of Israel, as the popular Palestinian statements of Malik Obama’s scarf indicate.

Third, due to the centuries of hatred and animosity between Jews and Arabs that dates back to the time of Abraham, Isaac and Ishmael, it’s highly probably that there will never be peace between the two ethnic groups.

Courting the Palestinians and supporting their claims to some of the lands that Israel conquered in the famous Six Day War, will only further divide the US relationship with Israel, and therefore is a harmful diplomatic pursuit that Trump should not entertain.