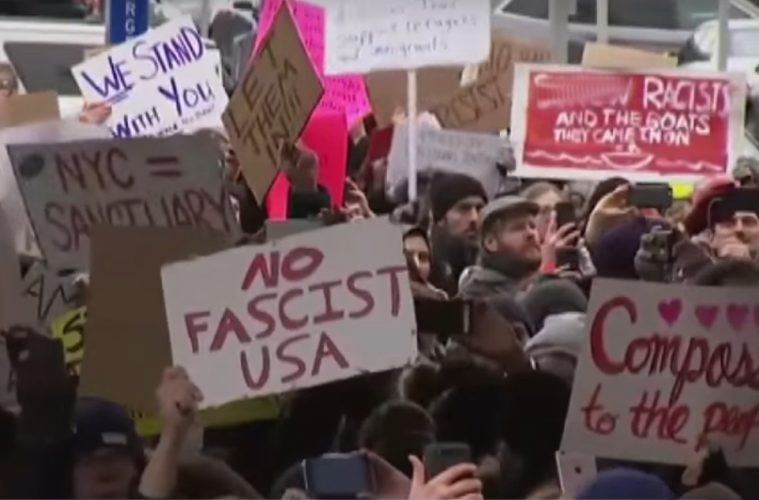 Immigration Protesters Demonstrate Their Own Ignorance

Liberals and Democrats have been up in arms, screaming, crying and protesting against President Donald Trump, claiming that he is anti-immigration. They point out that America has been a nation of immigrants and that most of us have ancestors that were immigrants.

On Thursday, restaurants across the nation closed in protest over immigration. Prompted by ignorant and biased liberals, #DayWithoutImmigrants was launched in an attempt to discredit President Trump’s executive order on immigration and refugees.

On one news broadcast, they interviewed several protesters who all stated that Trump is a hater of all immigrants. Even a news anchor echoed the same rhetoric.

However, if these liberals would actually stop for a moment, take their head out of their biased and hate-filled cloud, they would discover that President Trump NEVER said or did anything to indicate that he was against immigration or all immigrants.

USA Today is one of the guilty liberal media outlets that is trying to make President Trump into an immigrant hater. In their report on #DayWithoutImmigrants, they wrote:

“The Thursday protest was organized nationwide in response to President Trump’s highly controversial executive orders and policies on immigration and to support undocumented immigrants who have become a target of the Trump administration. The one-day boycott can trace its roots to another strike May 1, 2006, when hundreds of thousands across the USA also stayed away from work and school in protest of Bush administration immigration reforms.”

“In 2015, about 26.3 million foreign-born people were working in the United States, 16.7% of the workforce, according to the federal Bureau of Labor Statistics. Immigrants made up about 47% of the nation’s workforce expansion from 2004 through 2014, according to the Organization for Economic Cooperation and Development.”

“Census estimates show that more than 13% of the U.S. population is foreign born, almost 43 million people. On Thursday, #DayWithoutImmigrants was one of the top trending topics on social media.”

All Trump’s executive order, that was since blocked by a biased and liberal judge who ruled on agenda and not law, really said is that he wanted to place a TEMPORARY halt to immigration and refugees from certain nations known to produce terrorists, just long enough to implement a stricter and better vetting system. His purpose was not to permanently ban all immigration or all Muslims. His purpose was to buy enough time to improve the process of which immigrants and refugees would be deemed safe and allowed into the nation and which ones might pose a danger and thus be barred from entering.

Mexico not only deports thousands of illegal immigrants but they also throw many of them in jail. The same is true for many nations around the world. It’s necessary to control one’s border in order to protect the security of a nation and that’s all President Trump is trying to accomplish.

These liberal whining protesters are too stupid and too caught up in their own hatred for Donald Trump and conservative Republicans that they all repeat the same lies about what’s going one and are reacting to those lies instead of having any sense of discretion to find out the truth.