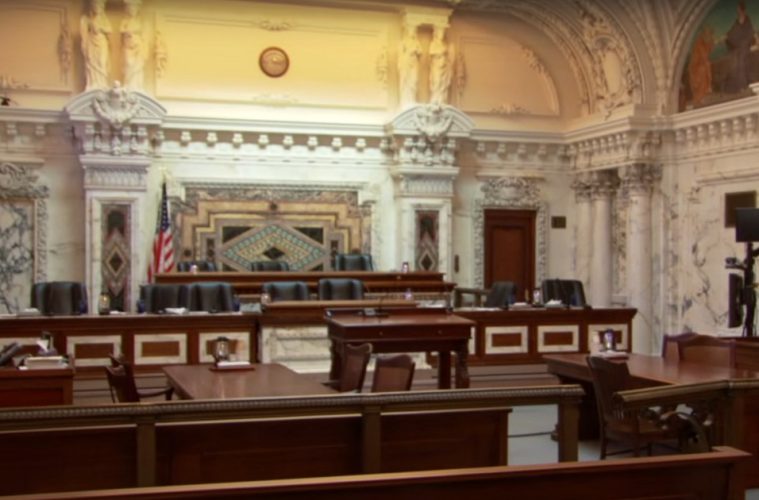 It’s been said many times that the 9th US Circuit Court of Appeals is THE most liberal federal court in all of America. They have a long track record of ruling more on agenda than on the law, which as will be shown below, has come back to bite them in the fanny more than once.

“In its latest hate America campaign, the Court ruled that an employer has the right to limit the speech of an employee. The case involved Bradley Johnson, a math teacher at Westview High School in San Diego. Johnson had banners in his classroom that depicted the American flag and the National Motto, ‘In God We Trust’.”

“Dawn Kastner, the principal at the high school had asked Johnson to remove the banners because they expressed a Judeo-Christian philosophy by displaying the motto. It seems that Kastner was the only person who openly objected to the banner being displayed in the classroom.”

“Robert Muise of the Thomas More Law Center planned to appeal Johnson’s case all the way to the US Supreme Court. He points out that the same school in which Kastner is principal of allows other teachers to display posters depicting the Dalai Lama and Malcolm X as well as Tibetan prayer flags.”

“The 9th U.S. Circuit Court of Appeals let stand its February ruling in favor of Live Oak High School administrators, who argued that a history of problems on the Mexican holiday [Cinco de Mayo] justified the decision to act against the American flag-wearing students. Officials at the Morgan Hill school ordered the students to either cover up the shirts or go home, citing past threats and campus strife between Latino and white students that raised fears of violence.”

“The principal of the school was afraid that there ‘there might be problems’ due to the American flag shirts.’ The following is from RedState:”

“This is a classic case of the heckler’s veto, something that is sadly prevalent on the left as Tolerance supplants God as the source of our morality, where a speaker is silenced by the government if a sufficiently loud opposition can be found. In this case, the students wearing the flag were faced with threats of violence and rather than punishing the racist thugs who were making the threats, free speech was prohibited. All of this in defense of a ‘holiday’ that has less cultural legitimacy than Kwanza.”

“One more point needs to be made. The Mexican students accused the ‘white’ students of ‘racism.’”

“One Mexican student responded, ‘But [Principal] Rodriguez, they are racist. They are being racist. F*** them white boys. Let’s f*** them up.’”

Since when do people from other countries have the right to supersede the displaying of the American flag on American soil at an American school? But, instead of upholding the rights of American students on American soil at an American school, the 9th Circuit Court of Appeals ruled in favor of giving a foreign flag and racially hate-filled Mexican students preference over our nation and our people. This is the same court that upheld the blockage of President Trump’s executive order on immigration, even though US Code gives him the legal right to do so,

In another case where the 9th Circuit Court of Appeals ruled on agenda instead of law, is the case of the Drake Bay Oyster Company. The Oyster company had been granted a permit to open an oyster farm in the Drakes Estero area back in 1972. In 2005, they were informed that the National Park Service was not renewing their permit.

However, in 2009, Congress took measures to allow the business to continue to operate by authorizing the Secretary of the Interior to issue them a Special Use Permit ‘notwithstanding any other provision of law.’ Knowing their deadline was approaching, Drakes Bay Oyster Company applied for the Special Use Permit in 2010.

In typical Obama administration style, Interior Secretary Salazar waited until the day before their current permit expired to deny the Special Use Permit to the Drakes Bay Oyster Company. With the help of the Pacific Legal Foundation, they took their case to the courts.

First the District Court in Oakland denied their case so they appealed to the Ninth Circuit Court of Appeals, the most liberal federal court in the nation. In January 2014, the 9th Circuit also denied their lawsuit. Both courts ruled that they have no jurisdiction to rule on the matter citing that federal bureaucrats like the Secretary of the Interior were given unlimited powers by Congress to make such arbitrary decisions as to deny the oyster farm’s permit without any reason whatsoever. In other words, the 9th Circuit Court of Appeals basically declared in their ruling that Cabinet members have absolute dictatorial powers that cannot be questioned or challenged in any court. That is clearly not written anywhere in the US Constitution.

For further proof that the 9th US Circuit Court of Appeals rules more on agenda than on law is their track record in the US Supreme Court. As reported by the Daily Caller:

“Eight of out of 10 cases from the 9th Circuit reviewed by the Supreme Court are overruled, according to a 2010 analysis published by the American Bar Association. The 9th Circuit, which is known for its liberal tendencies, has the second-highest reversal rate of the 13 appellate courts below the Supreme Court.”

“No one familiar with the 9th Circuit Court of Appeals should be surprised at today’s ruling. The 9th Circuit has a well-earned reputation for being presumptively reversible.”

It’s impossible to eliminate the 9th Circuit Court of Appeals, but it is possible to drastically limit their range of influence, as reported by Fox News:

“They argue that the 9th is too big, too liberal and too slow resolving cases. If they succeed, only California, Oregon, Hawaii and two island districts would remain in the 9th’s judicial fiefdom…”

“Conservatives have mocked the 9th Circuit for years, often calling it the ‘Nutty 9th’ or the ‘9th Circus,’ in part because so many of its rulings have been overturned by the U.S. Supreme Court.”

“The court has a reputation as one of the most liberal in the country, in large part because of its makeup. Eighteen of the court’s 25 active judges have been appointed by Democrats. Former President George W. Bush appointed six justices, while former President Barack Obama appointed seven.”

If the bill introduced by Flake and McCain manages to get passed, that would mean that President Donald Trump would be able to appoint all 25 of the new judges for a new 12th Circuit Court. That would be a breath of fresh air in a liberal judicial system that stinks like the cesspool it’s become.