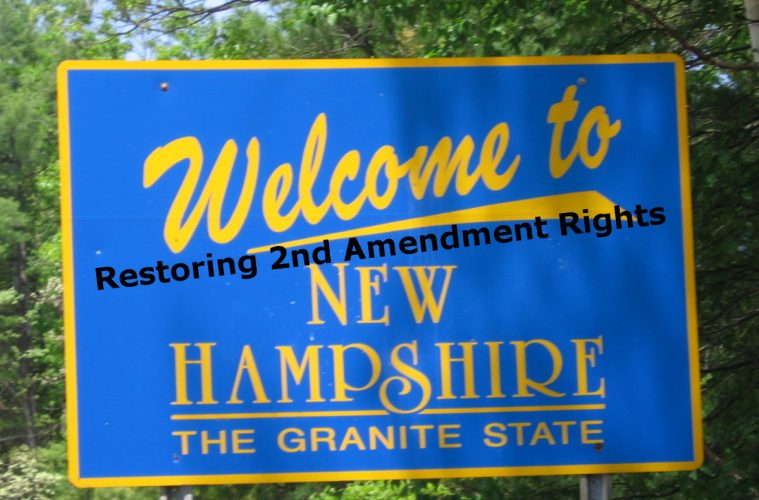 There are two corners of the United States that are known as being bastions of liberalism and Democrats. The northwest with Washington and Oregon are one, the other is New England in the northeast corner of the nation.

New England is composed of Connecticut, Maine, Massachusetts, New Hampshire, Rhode Island and Vermont. Some of the strictest gun control laws in nation are found in New England states, especially Connecticut and Massachusetts. Connecticut has long been the home of some of the most popular firearms companies in America, but some have already began expanding outside the state with rumors of relocation surfacing.

New Hampshire! A lonely island surrounded by liberal Democrats and liberal Canada, New Hampshire is a ray of sunshine in one of the politically darkest corners of the nation. Currently, Republicans hold a 14-10 lead in the Senate and a 226-174 lead in the House.

“AN ACT repealing the licensing requirement for carrying a concealed pistol or revolver.

I.  Increases the length of time for which a license to carry a pistol or revolver is valid.

II.  Allows a person to carry a loaded, concealed pistol or revolver without a license unless such person is otherwise prohibited by New Hampshire statute.

III.  Requires the director of the division of state police to negotiate and enter into agreements with other jurisdictions to recognize in those jurisdictions the validity of the license to carry issued in this state.

IV.  Repeals the requirement to obtain a license to carry a concealed pistol or revolver.”

According to a report by the NRA:

“In New Hampshire, existing state law recognizes the right of any citizen who can legally own and possess a firearm to carry it openly, either loaded or unloaded, anywhere in the state not prohibited by law.  However, if a firearm becomes covered by a coat or if a woman prefers to carry a firearm for protection in her purse, he or she would need a concealed carry handgun license.  The proposed legislation would extend permitless open carry to permitless concealed carry, allowing law-abiding gun owners to protect themselves and their loved ones in the manner that best suits their needs.”

On Thursday morning, the New Hampshire House of Representatives voted to approve SB 12, sending the measure to Governor Chris Sununu, a Republican. Sununu should be a familiar name since his father is John Sununu, who served at White House Chief of Staff for former President George H. W. Bush. John Sununu served as governor of New Hampshire before going to Washington and then served as the Chairman of the New Hampshire Republican Party.

Chris Sununu was sworn into the Governor’s seat once held by his father, on January 5, 2017. Before that, he served for six years on the Executive Council of New Hampshire, also known as the Governor’s Council.

With Sununu’s background, gun rights advocates are hopeful that he will sign SB 12 into law and help restore the Second Amendment rights to the residents of the Granite State. The NRA is encouraging everyone to contact Gov. Sununu and urge him to sign the bill into law. You can do so by clicking here.