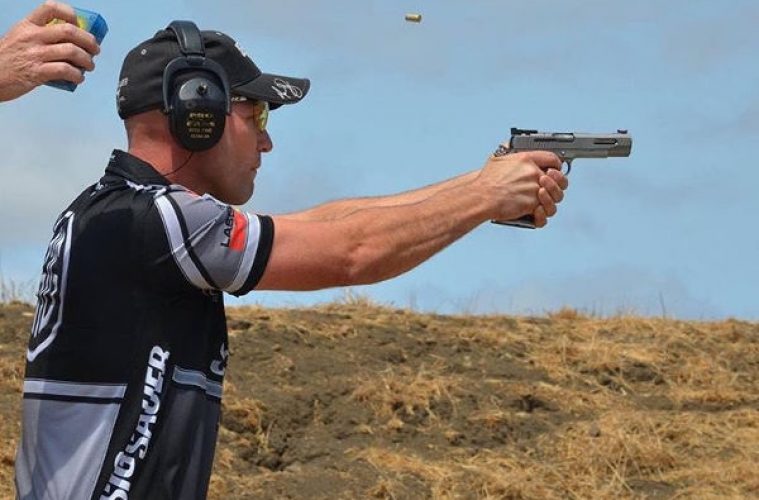 The 2016 Steel Master World Champion is…

Michel is currently the ONLY shooter in history to hold seven World Speed Shooting titles. He is also the only shooter to hold the title for four years in a row, from 2013 until 2016.

Max stated, “It is truly an amazing yet humbling feeling to be named the World Speed Shooting Champion,” he continued, “Looking back over my career, it is still hard for me to believe that I have been able to accomplish so much. Yet truthfully, this is exactly where I hoped that I would be at some point.”

The match lasted for 3 days, and is actually one of the “most historic matches” that Michel has has along the course of his career.

On the first day of competition, Michel competed in the Rimfire Optics division using a SIG SAUER 1911 pistol that was retrofitted with a Tactical Solutions 22LR upper. Michel’s final score of 60.85 seconds earned him a top place finish out of 60 divisional competitors. Competing in the Limited division on day two of the match, Michel finished in 2nd place with a total time of 88.85 seconds using a SIG SAUER 1911 Traditional Match Elite in 9mm. On the third and final day of the match, Michel competed in the Open division using a customized SIG SAUER 1911 in .38 Super. His total time of 74.84 seconds set a new overall course world record, earning him a first place finish in the division.

Michel earned the prestigious title of “Steel Master” after his combined time for the three divisions at an amazing 224.54 seconds! He was also in the making of a new record, which appointed him as the overall world record holder for 7 out of 8 of the stages of fire. This took place in the last match stage, Outer Limits.

“In what has essentially become known as the Super Bowl of the shooting sports, the ability to win seven world championships, four of them in a row, and capture all but one stage world record is a remarkable achievement,” said Sean Salter, Vice President of Sales and Marketing for SIG SAUER. “Throughout his career, Max has served as a great ambassador for the shooting sports and as valuable member to the SIG SAUER team. Everyone at the company wishes him continued success as we all wait with anticipation to see which record he will break next.”

Founded in 1981, with a mere 70 shooters, the Steel Challenge World Speed Shooting Championship started out with $20,000 in cash and prizes.