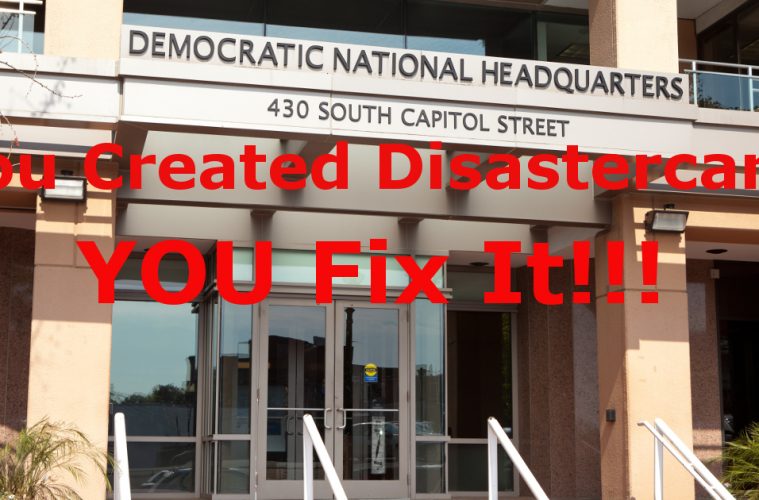 Democrats Should Fix Obamacare or Let It Collapse on Themselves

For the past eight years, I’ve been telling everyone that the financial ruin that hit the United States early into Barack Obama’s first term in office was not caused by former President George Bush. I’ve pointed out that it was former President Bill Clinton and his Democrats who forced the mortgage industry to create ways to put millions of Americans into homes they otherwise could not afford and they did. By the end of Bush’s presidency, millions of new homeowners discovered they could not afford to make their mortgage payments as the payments continued to increase year after year. What resulted was millions of Americans lost their homes to foreclosure and many of them also declared bankruptcy. This resulted in the collapse of the housing market which soon took down the entire nation’s economy with it.

At last, someone else has made the same claim about Bill Clinton:

“Remember how for years after President Obama first got elected we had to hear all about how Republicans destroyed the economy?”

“They had driven the car into the ditch, the president complained. Republicans were standing around, drinking their big Slurpee, Mr. Obama would add, laughing at his own unfunny joke. It was entirely up to him and the Democrats, he would say, to get America’s car out of the ditch. And then Republicans had the audacity to want the keys back!”

“As with just about every other thing the former president said, it was pretty much a complete lie.”

“We now know that all the economic ruin Mr. Obama ‘inherited’ was the result of the collapse in the housing market, caused by liberal Democratic government policies that forced banks to make bad housing loans to people who could not afford them.”

Now that the economy has been improving, that all seems to be part of the quickly forgotten past. Currently, everyone is focusing their attention on the Republican plans to replace Obamacare with a better national healthcare system.

The Democrats created a healthcare disaster that is on the brink of total failure. Republicans promised to repeal and replace the Democrat’s failure, but their initial offering seems to be falling short of what they promised. All Democrats and some Republicans believe the GOP replacement is worse than Obamacare itself. A couple days ago, we posted a question asking of President Trump and the Republicans should just do nothing about Obamacare and allow it to self-implode and collapse.

Journalist and political commentator Charles Hurt has another solution:

“Fast-forward eight years to today, when America’s health care system is worse than “in the ditch.” Disastercare has jumped the ditch and flipped over the guardrail and is now teetering on a cliff about to slide off into the abyss.”

“And while there may have been some stupid, reckless Republicans (In Name Only) who eight years ago abetted Democrats in their dangerous scheme to saddle the poor with unaffordable housing loans, there was not one single Republican in Congress who supported Mr. Obama’s dangerous scheme to destroy health care in this country. Not a single one.”

“And yet here we are today, and the entire onus on fixing Disastercare rests squarely on the shoulders of President Trump and congressional Republicans. Mr. Obama and his ‘Choom Gang’ Democrats are standing around whistling and smoking their joints. They are not even asking for the keys back…”

“But there is a wiser middle-ground approach to fixing the Obamacare debacle that Mr. Trump and Republicans in Congress should chart instead.”

“Yes, put together Republicans’ more market-based plans for salvaging Disastercare. Even include their crazy new tax credit entitlement program that should cause any decent conservative to break out in hives.”

“But — and this is crucial — demand that Democrats in Congress come to the table and support this rescue mission to fix the disastrous mess they created. Mr. Trump should play hardball with vulnerable Democrats and threaten to campaign against them if they do not support this plan.”

That’s the most brilliant suggestion I’ve heard. The Democrats created Obamacare. The Democrats forced it down our throats even though at the time nearly 70%-75% of the American people were against it. So, why shouldn’t the Democrats be forced to fix it or replace it with a better plan?

Then if Democrats refuse to fix their own mess, then let their first mess crash and burn and then see how many Americans still want them to run the government.