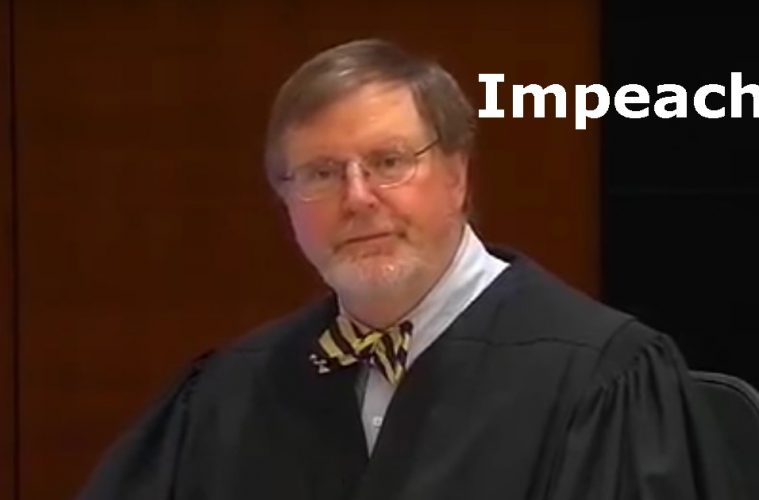 At the time our Framers were drafting and discussing the US Constitution, some warned about federal judges abusing their power.

One group of framers believed that the Judicial Branch was the weaker and less powerful of the three main branches of government.

Alexander Hamilton, defended the need for a Judicial Branch in the Federalist Paper #78, where he penned:

“Whoever attentively considers the different departments of power must perceive, that, in a government in which they are separated from each other, the judiciary, from the nature of its functions, will always be the least dangerous to the political rights of the Constitution; because it will be least in a capacity to annoy or injure them. The Executive not only dispenses the honors, but holds the sword of the community. The legislature not only commands the purse, but prescribes the rules by which the duties and rights of every citizen are to be regulated. The judiciary, on the contrary, has no influence over either the sword or the purse; no direction either of the strength or of the wealth of the society; and can take no active resolution whatever. It may truly be said to have neither FORCE nor WILL, but merely judgment; and must ultimately depend upon the aid of the executive arm even for the efficacy of its judgments.”

“This simple view of the matter suggests several important consequences. It proves incontestably, that the judiciary is beyond comparison the weakest of the three departments of power; that it can never attack with success either of the other two; and that all possible care is requisite to enable it to defend itself against their attacks. It equally proves, that though individual oppression may now and then proceed from the courts of justice, the general liberty of the people can never be endangered from that quarter; I mean so long as the judiciary remains truly distinct from both the legislature and the Executive. For I agree, that ‘there is no liberty, if the power of judging be not separated from the legislative and executive powers.’ And it proves, in the last place, that as liberty can have nothing to fear from the judiciary alone, but would have every thing to fear from its union with either of the other departments; that as all the effects of such a union must ensue from a dependence of the former on the latter, notwithstanding a nominal and apparent separation; that as, from the natural feebleness of the judiciary, it is in continual jeopardy of being overpowered, awed, or influenced by its co-ordinate branches; and that as nothing can contribute so much to its firmness and independence as permanency in office, this quality may therefore be justly regarded as an indispensable ingredient in its constitution, and, in a great measure, as the citadel of the public justice and the public security.”

On the other side of the argument were the Anti-Federalists who opposed a number of the provisions in the US Constitution. Among them was a politician and judge by the name of Robert Yates. In response to Hamilton’s Federalist Paper #78, Yates wrote several of the Anti-Federalist Papers. In #78-79, published in 1788, Yates countered Hamilton’s argument of the Judiciary being the weakest branch of the government and warned of what America is witnessing today with the federal judiciary assuming far more power than Federalists like Hamilton believed would happen:

“I have said that the judges under this system will be independent in the strict sense of the word. To prove this I will show that there is no power above them that can control their decisions, or correct their errors. There is no authority that can remove them from office for any errors or want of capacity, or lower their salaries, and in many cases their power is superior to that of the legislature.”

“1st. There is no power above them that can correct their errors or control their decisions. The adjudications of this court are final and irreversible, for there is no court above them to which appeals can lie, either in error or on the merits. In this respect, it differs from the courts in England, for there the house of lords is the highest court, to whom appeals, in error, are carried from the highest of the courts of law.”

“2nd. They cannot be removed from office or suffer a diminution of their salaries, for any error in judgment [due] to want of capacity. It is expressly declared by the constitution, ‘That they shall at stated times receive a compensation for their services which shall not be diminished during their continuance in office’.”

“The only clause in the constitution which provides for the removal of the judges from offices, is that which declares, that ‘the president, vice-president, and all civil officers of the United States, shall be removed from office, on impeachment for, and conviction of treason, bribery, or other high crimes and misdemeanors.’ By this paragraph, civil officers, in which the judges are included, are removable only for crimes. Treason and bribery are named, and the rest are included under the general terms of high crimes and misdemeanors. Errors in judgment, or want of capacity to discharge the duties of the office, can never be supposed to be included in these words, high crimes and misdemeanors. A man may mistake a case in giving judgment, or manifest that he is incompetent to the discharge of the duties of a judge, and yet give no evidence of corruption or want of integrity. To support the charge, it will be necessary to give in evidence some facts that will show, that the judges committed the error from wicked and corrupt motives.”

Yates makes a great point as the judiciary having no power above them to correct their errors is accurate as far as many see it today. However, he was wrong in that the Constitution does say that all federal judges, including Supreme Court and lower federal judges like James Robart, are to serve as long as they are in GOOD BEHAVIOR.

Many legal experts have argued for years that when a judge usurps his or her authority and imposes their personal will via the bench that they are no longer serving in good behavior and should therefore be removed from the bench.

When a lower court judge like James Robart ignores US Code that gives the President of the United States authority to regulate immigration in the case of national security, then Robart is no longer acting in good behavior but ruling based on his own personal agenda and not the law. Therefore, Judge James Robart could and should be impeached and removed from the bench for being in violation of the terms of the US Constitution.

Once a few liberal judges rule on agenda instead of law and are removed from their judicial bench, it will make others stop and consider what they are about to do. It should force more to rule on law and not their own biases like Supreme Court Justices Ginsberg, Sotomayor and Kagin have done in the past several years.