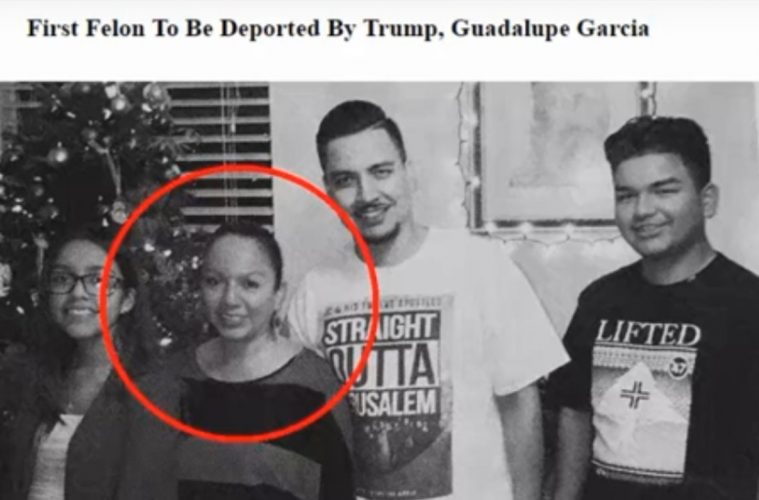 Guadalupe Garcia de Rayos is being used as a poster illegal by liberals and the mainstream media in their attempt to show just how cruel President Trump’s deportation order is. The fact is, she is a convicted felon and should have been deported years ago, but Obama illegally allowed her to remain in the country.

Rayos came to the United States illegally when she was 14, around 20 years ago. Whether she entered the country with her parents, other family or friends, makes no difference. At 14 years of age, she had to have known that she was violating US immigration law.

If she didn’t know it then, she has had around 20 years to try to correct the matter and go through proper legal avenues to attain citizenship, but she hasn’t. We have close friends that immigrated to the United States legally. It took them a number of years but they persevered and came here legally. Then they went through the necessary procedures to become American citizens. They legally applied for and received valid Social Security Numbers so they could work and pay taxes. When talking to them, they say that they are deeply offended and upset by how Barack Obama allowed millions of illegals to remain in the country. Our friends say that every illegal should be forced to go through the proper legal channels that they and millions of other legal immigrants have gone through. They also strongly believe that every illegal should be deported and forced to use legal means to enter the country or face deportation or imprisonment.

One of these close legal immigrant friends told us that yes, America is a nation of immigrants but it’s a nation of legal immigrants, people who came here legally. My wife’s father was a legal immigrant from Barbados. He applied to come to the US. He was processed through Ellis Island and then worked to become a US citizen. He also felt strongly about illegals needing to be deported and forced to use the same legal means that he used.