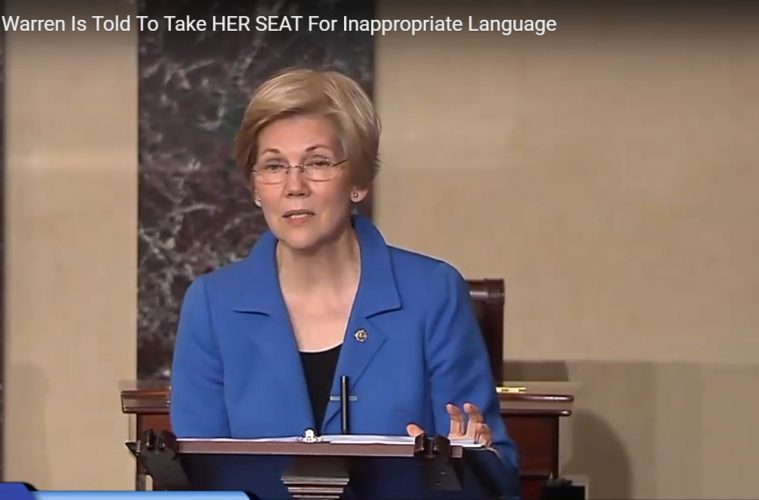 Among the Democrat members of the US Senate, Elizabeth Warren has to be counted as one of the most liberal and unethical Senators in Washington DC.  During the confirmation hearings on Jeff Sessions, Warren launched into a tirade that was stopped by Republican leader Mitch McConnell. The Senate then voted to silence her due to her tirade breaking Senate rules of using inappropriate language.

The Senate voted to bar Sen. Elizabeth Warren (D-Mass.) from speaking on the floor Tuesday night, after Majority Leader Mitch McConnell (R-Ky.) said her blistering comments about fellow Sen. Jeff Sessions, President Trump’s pick for attorney general, broke Senate rules.
Senators rebuked Warren in a 49-43 party-line vote, rejecting Warren’s push to overturn a ruling by Senate Republicans that she had violated the rules during a Senate floor speech.
Warren needed a simple majority to overturn the ruling by Sen. Steve Daines (R-Mont.), who was presiding over the the Senate during the Massachusetts Democrat’s speech.
The move means the progressive senator won’t be allowed to speak from the floor until after the Senate wraps up its debate on Sessions’s nomination, expected to occur on Wednesday evening.
Read More Here