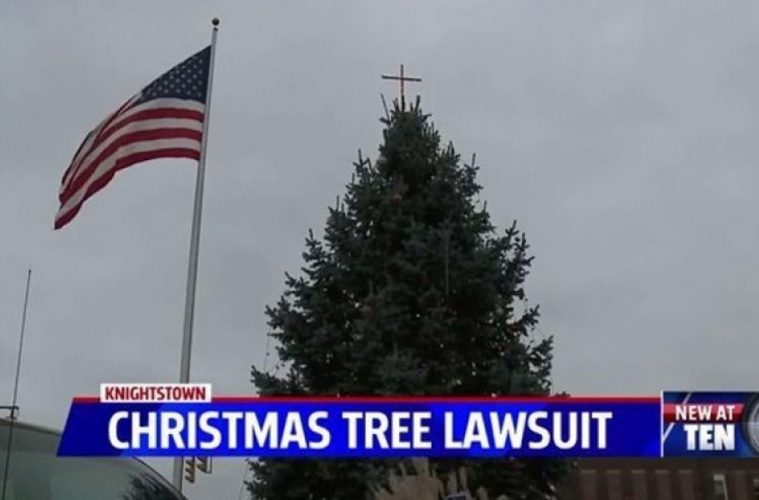 Cross on Christmas Tree Removed Due to ‘Irreparable Harm’

When George Washington was elected President of the United States, he marched everyone to a local church to worship and praise God. He offered up a prayer to God, thanking Him for his sovereign grace and mercy in the formation of the new nation. Christianity, worship of God and prayer has played a vital place in America’s history. The Supreme Court and Congress began each session with prayer. Starting with George Washington, every President has taken the oath of office with his hand upon a Bible, except for Teddy Roosevelt, John Quincy Adams and Lyndon B. Johnson.

In 1892, the US Supreme Court ruled that America is a Christian nation in case of Church of the Holy Trinity v. United States. In that decision, Justice David Josiah Brewer wrote:

“No purpose of action against religion can be imputed to any legislation, state or national, because this is a religious people. This is historically true. From the discovery of this continent to the present hour, there is a single voice making this affirmation. . .. There is no dissonance in these declarations. There is a universal language pervading them all, having one meaning; they affirm and reaffirm that this is a religious nation.  These are not individual sayings, declarations of private persons: they are organic utterances; they speak the voice of the entire people. . .. These, and many other matters which might be noticed, add a volume of unofficial declarations to the mass of organic utterances that this is a Christian nation.”

Around 1900, liberal progressives set forth a plan to change America from a Christian nation into a liberal progressive socialist nation. They surmised that it would take at least 100 years to change the face of America by undermining the institution of the family and traditional marriage; American patriotism and Christianity.

A huge step to that goal was launched in 1960 when an atheist mom in Baltimore filed a lawsuit against the Baltimore public schools claiming that it was unconstitutional for her son to be forced to read the Bible at school. In 1963, her lawsuit had been with another one to form Abington School District v. Schempp. The lawsuit went to the Supreme Court who agreed with the plaintiffs, one of whom was Madalyn Murray O’Hair, and reading the Bible in public schools was halted.

By the end of the 1960s, additional lawsuits resulted in the removal of prayer and any other vestige of Christianity from the public classroom. Atheists have been crawling out from their darkness on a regular basis to remove any trace of Jesus, God, the Bible and Christianity from public life. They’ve forced the removal of the Ten Commandments from many a public building and property.

In one of the latest attacks on Christianity, the small town of Knightstown, Indiana has caved in to the demands of a lone person complaining about the cross on the top of the town’s Christmas tree.

Rather than face the expense of fighting the lawsuit, the Knightstown city council voted to remove the cross. They issued a statement saying:

“It is with regret and sadness that the Knightstown Town Council has had the cross removed from the Christmas tree on the town square and is expected to approve a resolution at the next council meeting stating they will not return the cross to the tree.”

Using O’Hair’s definition of atheism, it amounts to nothing more than anarchy at all levels, personal, political and religious. It’s not just about religious beliefs, but about every aspect of decency, morals and values. Dictionary.com defines anarchy as:

“1. a state of society without government or law.

2. political and social disorder due to the absence of governmental control:

The death of the king was followed by a year of anarchy.

4. lack of obedience to an authority; insubordination:

the anarchy of his rebellious teenage years.

5. confusion and disorder: Intellectual and moral anarchy followed his loss of faith.

It was impossible to find the book I was looking for in the anarchy of his bookshelves.”

True atheists are not just lost souls, but they are dangerous people. They should not be trusted. Since they question all authority, they should never be allowed to hold any position of authority as they will only strive to exert their anti-God, anti-government, anti-authority anarchism on the rest of us.

The actions of the ACLU in forcing Knightstown to remove the cross from atop their Christmas tree is just one of the latest examples of atheistic anarchy happening in America.