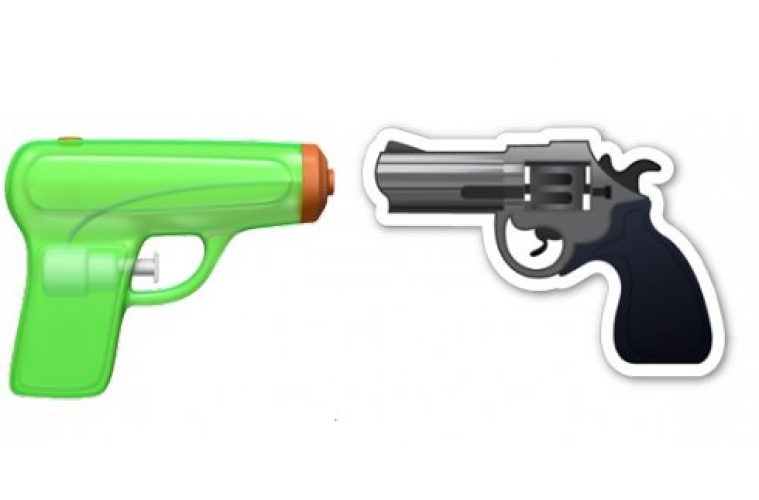 In the wake of recent shootings, and war on the 2nd amendment, Apple has decided to bow to the politically correct, liberal agenda. Starting in September, a water pistol is to replace the revolver emoji*.

The new green and orange emoji, with white plastic trigger, looks distinctly like a harmless toy and will replace the black and silver revolver.

The change, which comes into effect from September, was announced as Apple released 100 new emoji, including a rainbow flag, female athletes, police officers and construction workers and single-parent families.

So in an effort to thwart crime, Apple has eliminated a small, digital gun icon used for silly text conversations. Ironically enough, this decision actually follows Microsoft’s change; in which they replaced their toy gun with a realistic looking one.

While the move was welcomed by anti-gun groups in the US, some questioned the point.

In a statement that did not directly address the replacement of the gun, Apple said the update included “beautiful redesigns of popular emoji”.

They are indirectly suppressing the 2nd amendment by sugar coating it with a statement about redesigns, in an effort to be politically correct and not step on anyone’s toes. How about the toes of the right-wing? Do we not have a dog in the fight? Everyone tip-toes around so that liberals don’t get their little feelings hurt, but can we seriously not even tolerate a gun emoji? Next, Hollywood will be removing gun props and replacing them with water pistols. That oughta get rid of violence in America. Right?

Careful who you vote for, or the gun emoji won’t be the only firearm taken from us.

***Emoji – a small digital picture or pictorial symbol that represents a thing, feeling, concept, etc., used in text messages and other electronic communications and usually part of a standardized set (www.dictionary.com)

For more on the story, visit www.theguardian.com.